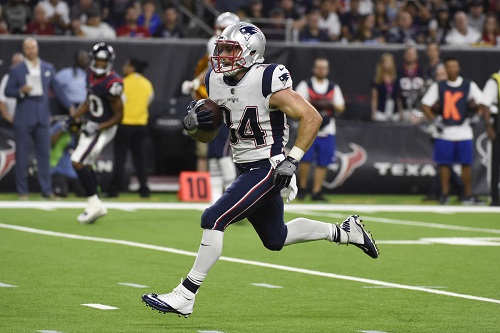 QB Nathan Peterman, Buffalo Bills: Peterman was named the starter this week by head coach Sean McDermott in a slightly surprising move. Tyrod Taylor had been decent this year up until Sunday against the New Orleans Saints when he threw for 56 yards on 18 passes. Now, the fifth-round rookie gets his shot. I liked Peterman early in the year as I thought he could take over the starting role and do quite well. We shall find out exactly how well when he faces a Los Angeles Chargers defense that has been good but not great. As long as Peterman gets some protection from Joey Bosa and Melvin Ingram, he could be in line for a solid day. That's a big if, however. The rest of the season looks pretty promising though. The Chiefs next up in Week 12 and the Chiefs' issues in the secondary are well known. After that, Buffalo will play the Patriots, Colts, Dolphins and Patriots again, respectively. All of those teams can be thrown on, and the Patriots can put up plenty of points quickly, which could lead to even more passing attempts for Peterman, assuming he holds on to the starting role. Add in Kelvin Benjamin getting more comfortable with the playbook along with a healthier Charles Clay and there is much to like about Peterman.

RB Jamaal Williams, Green Bay Packers: Owned in 46.9 percent of ESPN leagues, go out and grab Williams if you are thin at RB. The Packers go up against the Baltimore Ravens this week, and the Ravens have given up more than 150 rushing yards in four of their nine games this season. Meanwhile, the Ravens' offense hasn't been electric this season, which means their defense could be defending some shorter fields this week. Williams should see a heavy workload with Aaron Jones (knee) out and Ty Montgomery (ribs) likely to miss this game. Williams would retain some value over the next three weeks or so while Jones is sidelined, but this backfield will likely turn into a timeshare unless Williams posts a big game against Baltimore.

RB Rex Burkhead, New England Patriots: It is hard to know how the Patriots will use their running backs each week. Yet, Burkhead has carved out a Danny Woodhead-type role as a receiving specialist who can also carry the rock (10 carries against Denver last week). Oakland has given up a lot of points to running backs (which is great for Dion Lewis as well, so make sure he's not available in your league!), but the Raiders are also susceptible to those short passes to running backs in the flat or out of the slot. I think Burkhead could have himself a big afternoon in Mexico City.

WR Terrance Williams, Dallas Cowboys: Williams has always been a player whom you never know when to start because big weeks are so rare for him. Case in point, he followed his standout game versus Kansas City in Week 9 with a one-catch, 9-yard finish in Week 10. That being said, I think the Eagles will put up a lot of points against the Cowboys and as a result, Dak Prescott will be dropping back to pass a lot. Williams should benefit here, especially in potential garbage time. That's not how owners would prefer their fantasy points, but a garbage-time TD gives you the same amount of points as a TD on the first play of the game. Williams is owned in only 15.5 percent of ESPN leagues, but he has an opportunity to produce here. If you are in need of a fill-in at WR, I think Williams could net you a 4-65-1 line versus the Eagles.

WR Corey Davis, Tennessee Titans: Davis was targeted a team-high 10 times last week in the win against Cincinnati. Even though he only caught four of those passes, it is a good sign for his rest-of-season usage. The rookie appears to be the legitimate No. 2 wideout in Tennessee behind Rishard Matthews, and the schedule leading into and through the fantasy playoffs is a good one for Davis; Indinapolis, Arizona and San Francisco are all on the docket. Plus, this week's opponent, the Steelers, are banged up a little at the cornerback position. That should ensure some scoring chances for Davis.

TE Tyler Kroft, Cincinnati Bengals: I'm going to include Kroft this week despite the fact that his ownership percentage of 50.1 is just above my threshold. There are two reasons why I'm doing this:

1. It is getting really tough to find a worthwhile tight end who is owned in less than half of all ESPN leagues due to injuries and bye weeks.

In all seriousness, Denver has allowed the second-most fantasy points to tight ends, so Kroft immediately becomes a worthwhile streaming option this week. He also gets Cleveland next week which has allowed the third-most fantasy points to TEs, so Kroft is actually a two-week streaming option. If you have been hit by the injury bug at tight end or are in full week-to-week streaming mode, Kroft is definitely worthy of your consideration right now.