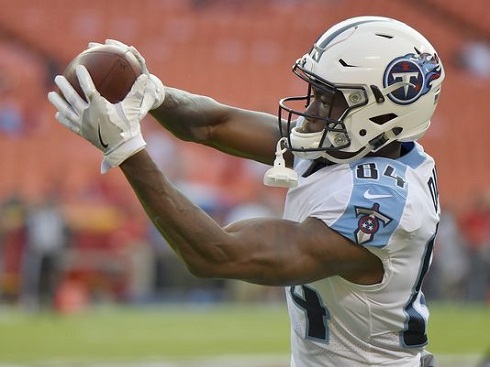 If Mike Evans wasn't suspended, this would be a no-brainer. As it is, this is quite a value pick. Fitzpatrick has never been shy about throwing the ball downfield, for better or for worse. Just look at what he did in Week 6 versus the Cardinals in a little more than a half -- 290 yards, three touchdowns and two interceptions. You're going to have to deal with those turnovers with the Harvard man, but the Bucs should still throw often against a Jets defense that has allowed the eighth-most fantasy points per game to QBs and ceded at least two passing scores in seven of their nine games. With DeSean Jackson, Adam Humphries, Cameron Brate, Doug Martin and others still in the cupboard, don't let Evans' absence scare you off; a good number of stellar weapons remain here for Fitz, a former Jet. Also know that he doubles as a top sleeper of the week in redraft leagues, according to our Daniel Brown.

One caveat: Freeman is dinged up and nursing shoulder and knee pains. It doesn't look like he's at risk of missing Week 10, but if he does, know that Tevin Coleman currently costs $4,800. Despite the injury concerns, Freeman is close to must-buy territory simply because he will probably never be this cheap again. Freeman's price has plummeted amid a four-week stretch in which he hasn't scored or gained more than 90 yards from scrimmage. On the plus side, Freeman has a 15-touch floor, and this game will be played in The ATL. Freeman has scored significantly more often at home than on the road since the start of the 2016 season. Also, the Cowboys rank in the bottom half of the league in rushing defense and they have permitted the second-most receptions per game to RBs. Freeman, who is always a receiving threat, is a high-floor, high-ceiling option in DraftKings scoring. Yet, because of his recent lack of production, he is only the 13th-most expensive running back on the board this weekend.

Admittedly, this is more of a gut feel. But if you're looking for a $4,000 gamble at wideout, why not roll the dice on this rookie who, while in very limited time, already looks like the Titans' best wide receiver? It's just difficult to watch Titans tape and not come away incredibly impressed with this 6-foot-3 rookie. This is just a special athlete. In his two full games this year, Davis has caught eight passes for 97 yards. The more encouraging number is Davis' snap count. After a long layoff due to a hamstring injury, Davis returned in Week 9 and was on the field for 75 percent of Tennessee's offensive plays. And the Titans want that number to increase this weekend. The Bengals aren't a particularly easy assignment, but I'm banking on Davis' superb talent, his involvement and the Titans' lack of a true star receiver elsewhere who is going to hog targets. Instead, Davis is that star.

Henry's price has dropped $900 from last week, which I don't understand. Yes, he flopped in Week 8 with a two-catch, 11-yard box score. But in the four weeks prior to that game, Henry averaged 12 points per game on DraftKings. While the Jaguars have the league's top pass defense, they have been much less effective at guarding tight ends than wideouts. To wit, Jacksonville, which has given up the fewest fantasy points per game to WRs, has allowed the 14th-most fantasy points per game to opposing TEs. With Jalen Ramsey and Co. blanketing Keenan Allen and Tyrell Williams, quarterback Philip Rivers should have his eyes on Henry. It's also worth noting that Antonio Gates is barely a whisper in Los Angeles' offense at this point. He has seen just four targets in the team's past three games, so don't be concerned about him acting as a drain on Henry's upside.