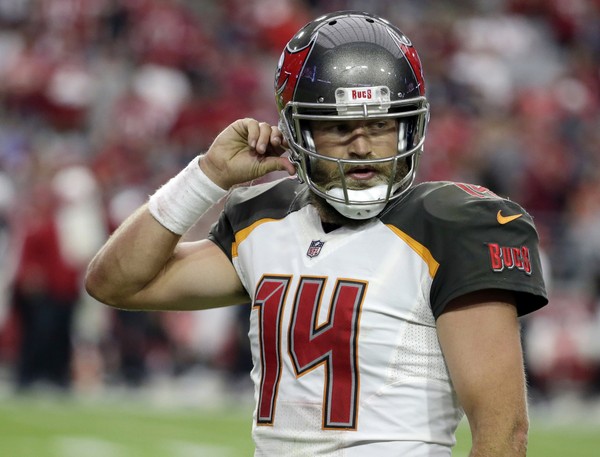 Check out these updated sportsbook odds for Week 10

QB Ryan Fitzpatrick, Tampa Bay Buccaneers: Last week, Fitzpatrick came on in relief of an injured Jameis Winson and struggled a little to get the offense moving against the Saints. However, with a full week of practice and the knowledge that he will be starting the game, Fitzpatrick should be a decent streaming option this week with several solid fantasy QBs on bye (Carson Wentz, Alex Smith and Derek Carr). He goes against his former team in the New York Jets, and while the Jets have shown some ability to get to the QB -- blitzed early and often last week against the Bills, recording seven sacks -- I expect Fitzpatrick to show off his wheels and pick up some additional yards on the ground. The Bucs will probably often use screen passes to RBs and TEs, which should help Fitzpatrick. Without the suspended Mike Evans, this isn't the perfect situation for Fitzpatrick and his fantasy value. But given his low ownership (18.3 percent in ESPN leagues) and the QBs on bye, he's a good value play this week.

RB Devontae Booker, Denver Broncos: He is owned in only 8.1 percent of ESPN leagues, but Booker is an interesting add at a position where there have been so many injuries and so much inconsistent play. C.J. Anderson continues to be the backfield leader, but barely; Anderson took just one more snap than Booker last week, 23-22. This week, the Broncos host the Patriots and there is a pretty good chance this game gets out of control early, so the Broncos may end up going away from the run and using Booker more since he is their preferred pass-catching back. I don't think Booker will have a massive game, but he is a great option if you are struggling at RB and willing to take a guy with upside. Given that his usage is on the rise and that the Broncos' offense is in need of a spark, Booker could well become more featured over the next few weeks. He is a "What the heck" play this week but has longer-term value.

RB Rod Smith, Dallas Cowboys: This is a true deep sleeper for those of you who have space on your bench … or are carrying a second defense or tight end! He is currently owned in 5.3 percent of ESPN leagues, and if you are looking for someone who could become a major factor over the next few weeks if things break right, this is the guy. There are a few variables that are out of Smith's control  -- most namely, whether Ezekiel Elliott is suspended at all -- and he will still have to contend with Alfred Morris and Darren McFadden for touches. We should know more about Elliott's playing status by Thursday afternoon, but Smith is a speculative add that could pay dividends down the stretch.

WR Tyler Lockett, Seattle Seahawks: Lockett had a tough outing in Week 9 on the heels a huge Week 8 against Houston. Although he has been battling a shoulder issue, Lockett was taken off the team's injury report Wednesday. He is owned in 43.6 percent of ESPN leagues, so he fits our criteria for a sleeper this week as Seattle plays at Arizona, where Lockett will be a solid flex option, especially in PPR leagues. The next two weeks also look pretty good for Lockett with matchups against Atlanta and San Francisco next on the docket. If you are in need of a WR for a three-week stretch, Lockett is a good option to consider.

WR Roger Lewis, New York Giants: With all of the injuries to the Giants' wide receiving corps this season, the G-Men have had to go deep into the depth chart to find their next men up. Lewis hasn't really been on Eli Manning's radar so far, catching just one pass in each of the last four games (one of which went for a touchdown), but his matchups for the next couple of weeks are pretty intriguing. This Sunday, he will face San Francisco's defense, which has been pretty bad and given up plenty of points to opposing WRs. Then in Week 11, Lewis will battle the Chiefs, who have surrendered the most fantasy points per game to wide receivers. Owned in just 4.8 percent of ESPN leagues, Lewis is someone with a low floor but also a high ceiling if you are willing to roll the dice on a boom-or-bust candidate.

TE Charles Clay, Buffalo Bills: Now is the time to grab Clay if he is on your league's waiver wire! He is questionable to play this week because of the knee injury that has kept him sidelined for Buffalo's past three games, but Clay has been practicing and could be a big producer against the Saints. However, you aren't necessarily picking him up solely to play him in Week 10; you should also be looking ahead to his next five or six matchups against defenses that are susceptible to the pass and opposing offenses that could turn those games into high-opportunity shootouts. Clay is owned in 40.6 percent of ESPN leagues and prior to his injury, he was a legitimate TE1. With some decent matchups upcoming, his ownership rate will only continue to increase, so stash him now.