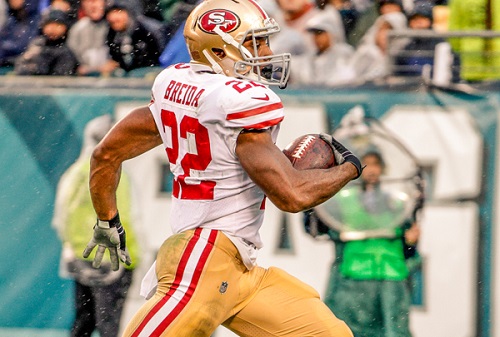 Check out the updated sportsbook odds for Week 9.

QB Jared Goff, Los Angeles Rams: The fantasy community still hasn't fully bought into the Jared Goff redemption season, and that is understandable … except he ranks as the 13th best quarterback in terms of average points per contest, and he continues to develop a rapport with his receivers and understand the play calling. This week he takes on a New York Giants team that earlier this week suspended Janoris Jenkins for violating team rules, which should result in better opportunities for the Rams wide receivers which in turn helps Goff. Add to this that the Giants have really only played one decent football game this season (against the Broncos) and against Seattle before the bye week, they gave up several short fields. This is a great opportunity for Goff to put up 20+ fantasy points and he could well be available in your league given his 35% ownership per ESPN leagues.

RB Matt Breida, San Francisco 49ers: This rookie out of Georgia Southern has been on the deep dynasty radar for a while, especially with the discussion that centered around whether Carlos Hyde would continue to be the lead back in San Francisco. Well, Hyde wasn't traded but the 49ers did acquire a new (and potential franchise) QB before the trade deadline bringing in Jimmy Garappolo from the Patriots. While it is unlikely that he starts this weekend, he is in line to start next week against a pretty bad New York Giants team, or worst case the week after their bye against Seattle. This move should be interpreted that the 49ers QB play wasn't getting the job done, but doesn't necessarily mean it's a move to younger talent evaluation, however that is likely to happen over the rest of the season due to their record. Breida found the end zone last week and has been getting about 4-6 carries a game and being targeted in the passing game as well, and it's hard to see that changing over the next few weeks - especially with a new QB under center. He is a flex play this week at best but could be an intriguing player over the rest of the season depending on how San Francisco decides to use him.

RB Andre Ellington, Arizona Cardinals: Ellington is owned in 20.1% of leagues and, while he is the back up to Adrian Peterson, he has been featured more recently (prior to a quad injury that limited him the past two games) in the passing game. In weeks 4 and 5 he caught 9 passes in each game and against a pretty bad San Francisco team he could be in line for a similar workload this week - especially with Drew Stanton taking over at QB for the Cardinals due to the injury to Carson Palmer. He will be a security blanket for Stanton and that could lead to a lot of short passes which in a PPR league will add up quickly. He is a flex play this week with rest of season upside.

WR Robert Woods, Los Angeles Rams: With many teams on bye this week a great option at WR could be Robert Woods. He is likely to benefit from the absence of cornerback Janoris Jenkins who was suspended by the Giants earlier this week. Woods has been up and down this season from a fantasy perspective (and real life one too!) but the past 3 weeks he has put up double-digit points and has been targeted heavily by Goff this year. He hasn't found the end zone this season but that could easily change this weekend. I think the Rams hang plenty on this New York Giants team and all Rams receivers are options this week, Woods is only owned in 20.6% of leagues and so ends up on our list here.

WR Robby Anderson, New York Jets: If you have been reading this article for a while you will recall the many weeks of love for Josh McCown, and while he has struggled in real life the past couple of weeks to get his team over the line, his fantasy value continues to increase. With at least 18 fantasy points in three straight games, he goes into tonight with a chance to repeat that, and one of the primary beneficiaries over recent weeks has been Robby Anderson. Last year Anderson showed flashes of big game potential, and over the past couple of weeks, he has emerged as a red-zone threat having reached the end zone once in each week. I'm not expecting the same output as last week from Anderson, but he is a big play weapon and will see routes down the field against a Bills defense that has allowed the 10th most yards per game to receivers this season. His speed should provide a matchup problem for the Bills and if he gets in the end zone then he will reward owners taking the risk on a flex play here.

TE Vernon Davis, Washington Redskins: This selection is more about opportunity than matchup. Seattle has given up the 18th most points (mid-pack) to opposing TE. However, with Jordan Reed expected to miss this game with a hamstring injury and Niles Paul unlikely to play after suffering a concussion last week, Davis becomes the featured TE. The Seattle secondary has been decent this year, however last week against Houston they gave up just over 400 yards and 4 TDs to the incredible rookie Deshaun Watson, although they also had 3 interceptions. Washington is built fairly similarly to Houston (in my opinion) however they lack that true No. 1 WR which could mean the defensive backs can "cheat" a little more in coverage which could limit the upside of a guy like Davis in the attack. That being said, I think there will be plenty of yards in this game for the offense and if Kirk Cousins is accurate with his throws Davis could have a really nice game.