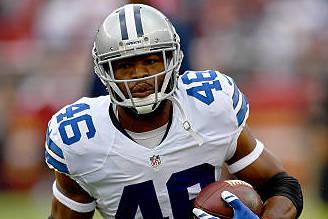 This is not written in stone, but it seems pretty clear that Dallas running back Ezekiel Elliott is going to be on the sidelines for the next six weeks. With Zeke’s suspension looming, the rush is back on to grab Alfred Morris or Darren McFadden. There is no way to know which player will get the start or if they might be mired in a running-back committee, but I like Morris for two reasons: First, McFadden has been made of glass since his days at Arkansas. Secondly, McFadden is a very old 30-year-old. So, even if he starts, he’s bound to get hurt. Thus, I would rather own Morris.

At just 25 years old, troubled Steelers wide receiver Martavis Bryant has been a headache for head coach Mike Tomlin since the end of the 2015 season. The cure to that headache seems to be a rookie 20-year-old ball of fire named JuJu Smith-Schuster, who already has four touchdowns and 424 receiving yards this season. With Antonio Brown gathering double teams across the field, JuJu has been beating up on opposing pass defenses week after week and is only getting better. The Steelers have a CAKE schedule on tap for the rest of the season, and Smith-Schuster owners will be happy to cash in.

After toting the rock 18 times for 113 yards against the Miami Dolphins, it’s time to give Baltimore RB Alex Collins a shot on your fantasy roster. Collins started getting double-digit carries back in Week 5 and is now getting equal playing time with Buck Allen. Collins also caught his first two passes last week, which makes him even more valuable to the Ravens and fantasy owners. Collins seems to be improving with each passing week, so should be added in standard leagues and is worth a look in PPR formats if he keeps catching passes.

Want to get an early start on Week 9 in fantasy football? Build your team in this $3 Pick'Em Contest on DraftKings.