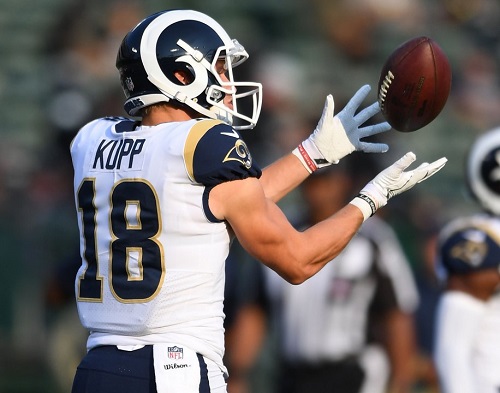 Make sure to check out the betting odds offered by sportsbooks

For those new to this column, the following list assumes that waivers have run your league and that those picked up were possibly covered in an article from ASL's John Adams. We are here to look for more players who have a chance to contribute in this weekend's slate of games and could be good adds for the rest of the season.

QB Tyrod Taylor, Buffalo Bills: owned in 47.5% of leagues, Taylor hasn't had an elite level wide receiving corp this year and has relied heavily on his TE (Charles Clay - now injured, although expect Nick O'Leary to slot in nicely here) as well as RB (LeSean McCoy). With Jordan Matthews potentially returning to the field this week or next there is reason to expect the passing game to improve and this would bode well for the rest of season outlook for Taylor. It hasn't been the passing that has made Taylor a decent QB for fantasy purposes, but rather his ability to scramble for yards. His rushing  attempts in the first 4 games were 7 or 8 each week, while against Cincinnati he only rushed 1 time, I expect him to rush more against the Tampa defense, who can be very aggressive in their pass rush. I do expect him to be sacked a few times, however this should fuel his desire to scramble out of the pocket and he could end up with a pretty solid rushing total especially in the second half.

RB Orleans Darkwa, New York Giants: Over the past 2 weeks Darkwa has established himself as the primary back in New York. After the way the offensive line played the first few weeks that last statement may not have meant very much, however the past 2 weeks - particularly against the Denver Broncos in week 6 - the O-line has blocked much better and Darkwa has had opportunity, and he has done a good job of capitalizing. This week will be another challenging week against a tough Seahawks run defense, however the game script should be fairly similar to last week (where he had 21 carries) and that should mean decent volume for Darkwa which translates to opportunity and fantasy relevance. He found the endzone 2 weeks ago against the Los Angeles Chargers, however last week despite 21 carries he did not record a TD ... I think he gets into the endzone at least once and he cracks 80+ yards this week making him a solid play considering he is only owned in 32.0% of leagues.

BONUS: Chris Ivory, Jacksonville Jaguars could be a sneaky start this week in PPR leagues given his involvement in the passing game and that fact that they are playing Indianapolis. Alex Collins, Baltimore Ravens is another sneaky start. He has a tough matchup against Minnesota, however he has increased his workload in each game and that means opportunity which if you are struggling to find someone to add because of the lack of depth at this position, he could be a consideration.

WR Cooper Kupp, Los Angeles Rams: Owned in 38.3% of leagues, the rookie out of Eastern Washington has been a tough one to judge for fantasy purposes. After his solid stat line in week 1 many rushed to add him to their lineups, only to be disappointed for the next 2 weeks where he put up few fantasy points and didn't find the endzone. He appears through the first 6 games of his career to be touchdown dependent to be a strong fantasy asset, however his QB is looking to him and so there is opportunity for him. This week he plays Arizona, who have given up the 5th most points to opposing WRs, and I expect the Rams offense to get back on track in terms of points scored and put up plenty against Arizona and wouldn't be surprised to see Kupp benefiting the most.

WR Allen Hurns, Jacksonville Jaguars: Hurns (27.1% owned) has been a fantasy football touchdown machine the past few years … much of that coming in garbage time, but for fantasy purposes that doesn't matter at all. With the injury to Allen Robinson early in the season, Hurns has been given a new opportunity to re-establish himself, not just for fantasy purposes either. Marqise Lee continues to be the favored target of Blake Bortles, and with his number of pass attempts down considerably this year, that means less balls to go around amongst the WRs. Still, Indianapolis has been terrible against the pass this year, and while Leonard Fournette (if healthy) will get his touches and yards ... and probably TDs as well, there should be ample opportunity for the Jacksonville WRs in this particular matchup. I like Hurns this week because of the matchup.

BONUS: A couple of WRs to look at Sunday morning if they play are Jordan Matthews, Buffalo Bills, and Mohamed Sanu, Atlanta Falcons (plays in the late game).

TE Nick O'Leary, Buffalo Bills: Prior to his injury, Charles Clay was a player I had been going on about and how criminally under-owned he was in ESPN fantasy leagues. Well … his replacement in O'Leary, is incredibly owned in only 0.6% of leagues! That's incredible considering how much Tyrod Taylor has relied on the TE position, as well as the fact that many at the TE position have succumbed to injury (Tyler Eifert, Charles Clay, Greg Olsen) and many are playing through injuries (Jordan Reed, Rob Gronkowski). Add to that the up and down nature of point production from this position and it all points to the fact that if you need a good option to start at TE this week (and potentially for the rest of the season) don't overlook O'Leary. In the game against Cincinnati he caught 5 catches for 54 yards, which is a decent return at the TE position in a PPR league. This week against Tampa Bay (5th fewest fantasy points allowed to TE), he has a tougher matchup, however he has had the bye week to work with Taylor and the rest of the first team offense, and I expect him to see plenty of targets from Taylor - especially if Matthews were to miss another game.

TE Austin Hooper, Atlanta Falcons: Hooper has seen a big increase in targets the past 2 games (sandwiching the bye week). In the game prior to the bye against Buffalo he caught 5 passes for 50 yards, while in the game last week against Miami he caught 7 passes for 48 yards. Not the greatest yard total (he did have 102 on 2 catches in week 1, however most of that was a blown coverage on a long TD pass), but the catch volume is there which is huge in PPR leagues. He is a consideration for season long as well, however there is a risk that his targets reduce once Mohamed Sanu returns - which could be this week against the New England Patriots. He is worth a look this week against the Patriots who have allowed the 3rd most points to opposing TE's in PPR leagues.

BONUS: Jack Doyle, Indianapolis Colts, George Kittle, San Francisco 49ers and Zach Miller, Chicago Bears are all worthy of consideration at a position that has been struggling on a week to week basis.

Hit me up on Twitter @brownsnake76 if you have any questions about fantasy football, or perhaps you want to give me your thoughts on the guys suggested here. If you are looking for a funny and slightly controversial T-shirt check out this selection