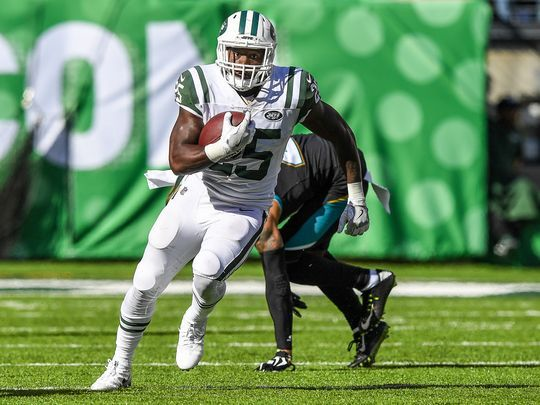 Below are this week's sleeper picks, and here are the betting odds offered by sportsbooks.

For those new to this column, the following list assumes that waivers have run your league and that those picked up were possibly covered in an article from ASL's John Adams. We are here to look for more players who have a chance to contribute in this weekend's slate of games and could be good adds for the rest of the season.

QB Josh McCown, New York Jets: We mentioned McCown last week, and he could be a great option this week again against the New England Patriots, who have given up plenty of points to opposing offenses. The Pats' defense did look better last week against Tampa Bay. However, Jameis Winston was still able to put up 18.5 points in standard leagues. McCown has been inconsistent but is a solid streaming option at home against New England.

RB Elijah McGuire, New York Jets: The Jets have been better than expected, and McGuire is an intriguing rookie who appears to be getting more looks in the offense. In the last two weeks, he has carried the ball 10 and 11 times, respectively. While he struggled his way to just 20 yards last week, he also caught two of three targets. Last week, Bilal Powell was injured, and there is a big question mark over whether he will play or not. While Matt Forte might return to the mix, there is a pretty good chance that McGuire will see a heavy workload. He could end up being great value for later in the season because of the injuries at the running back position and his own potential.

WR JuJu Smith-Schuster, Pittsburgh Steelers: Owned in 4 percent of ESPN leagues, he has out-snapped Martavis Bryant each of the past 3 weeks, and while Ben Roethlisberger hasn't been as good this year as he was last year, Smith-Schuster has found the end zone twice and averaged three catches per game from Weeks 2-5. The Kansas City defense has been good, but they have been exploited at various times in the secondary. I expect Smith-Schuster to benefit from the matchup this week.

WR Kendall Wright, Chicago Bears: He is owned in just over 15 percent of ESPN leagues, and while he has only found the end zone once this year, he is a player to watch in PPR leagues and possibly start if you're desperate at WR. Mitchell Trubisky targeted him five times last week, resulting in four catches for 46 yards. Wright has been targeted at least four times in every game but one and has caught an impressive 15 of 19 targets. As Trubisky improves, the Chicago wide receivers should see more targets and in the next three weeks ahead of their bye, they will take on the Baltimore Ravens, Carolina Panthers and New Orleans Saints, all of whom are capable of giving up big points to wideouts.

TE Austin Seferian-Jenkins, New York Jets: Owned in 47.6 percent of ESPN leagues, AS-J continues to be a viable streaming option at the TE position, which has been hit hard by injuries. His yardage totals haven't been fantastic, but he found the end zone last week against the Browns and should be a strong play again this week. He hauled in six passes last week and has at least four catches in three straight games. Therefore, AS-J is a highly recommended streaming option in PPR leagues this week against the New England Patriots, who have given up the fourth-most fantasy points to TEs this year.

TE Zach Miller, Chicago Bears: Owned in 20.2 percent of ESPN leagues, Miller has been a favored target of whomever is under center for the Bears, ranking second on the team in targets. So far, his fantasy output hasn't been stellar, however, he found the end zone last week (albeit luckily). With Trubisky gaining more comfort in the offense, Miller is a serviceable TE option this week.

Have a question about a player? A start-sit question? Want to point out someone that you think was overlooked? Fire me your comments or questions on Twitter - @brownsnake76