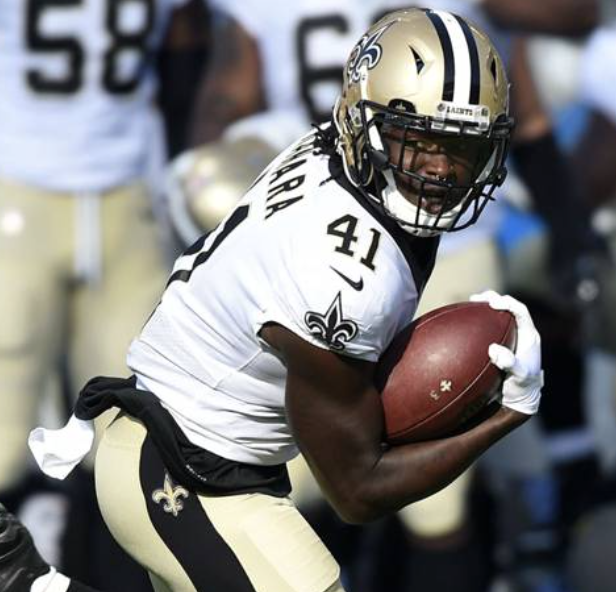 Saints rookie RB Alvin Kamara is ripping up the stat sheet week after week, but his ownership is still less than 50 percent in both Yahoo and ESPN Fantasy Leagues. I don’t know what fantasy owners are waiting for, but you have my permission to go pick up this stud running back. Saints QB Drew Brees locked onto his rookie running back in Week 4 and they connected on all ten targets for 71 receiving yards and a touchdown. This alone makes him a PPR monster who must be added in all formats. Forget Adrian Peterson, Kamara is the guy to own in the Big Easy.

With the stunning loss of rookie running back Dalvin Cook, another player must come in and fill the void in Minnesota. That player Latavius Murray. Even though he is struggling with injuries of his own and has been slow to recover from offseason ankle surgery, Murray is another must-add in all fantasy formats. After Cook went down during a Week 4 clash against the Lions, Murray came in and rushed seven times for 21 yards. Don’t expect Murray to put up numbers anywhere close to what Cook accomplished, but Murray has become the lead back on a team that must run the ball. In a fantasy football season ravaged by running back injuries, Murray is now the man in Minnesota.

Are we REALLY talking about Eddie Lacy again? Eddie Lacy is kind of like that all-you-can-eat buffet that just won’t leave your stomach. Once rookie running back Chris Carson broke his leg late in the fourth quarter against the Colts, Lacy rolled out onto the field, finishing the day with 11 carries for 52 yards. Even with Carson gone, Seattle still has a crowded backfield, but Lacy is sort of the best of the bunch. Unless Thomas Rawls suddenly starts running wild in Seattle, Lacy is the player to roster for Week 5 if you miss out on Kamara or Murray.