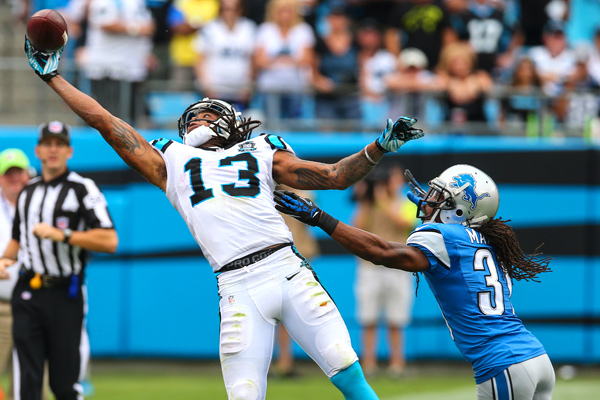 Kaep was one of the top waiver wire adds of the week and for good reason. He has simply been putting up huge fantasy lines over the past month. I don't want to say he is a must-start versus the lowly Bears, but he's reaching that level quickly and has a friendly fantasy playoff schedule.

Although Newton has scored three times on the ground in his last six games, he has averaged just 21.2 rushing yards per game during that time, which is not what you expect when you draft the Newton. His completion percentage has cratered (45.2 percent over the past two weeks) and he has thrown just eight touchdowns since Week 3. Add all of these worrisome numbers to an upcoming matchup at the Seahawks, and Cam looks like someone who is difficult to fully trust this weekend.

Andrew Luck is expected to be under center Monday night for the Colts. That's good news for all of their pass-catchers but especially so for Moncrief, who just keeps on scoring touchdowns. The Ole Miss alum has scored nine times in his last 12 games in which Luck was the QB. Facing a poor Jets pass defense and with T.Y. Hilton still fighting a back ailment, Moncrief could be Luck's go-to guy this week.

Benjamin would have been a bust last week if not for a very impressive, long, fourth-quarter touchdown catch at Oakland. He was limited in that game by a shoulder injury that he is still feeling this week. Richard Sherman got burned for big plays a couple of times by Mike Evans last Sunday, but he is still a very solid cover corner. Benjamin is not Mike Evans and considering Newton's current struggles (see above), KB has a lot going against him heading into Week 13.

This rookie hasn't averaged more than 4 yards per carry in a game since Week 7 and hasn't reached the end zone since Week 8. However, you shouldn't shy away from a running back who is getting 20-plus touches, especially against the Jaguars. Jacksonville has permitted 14.7 standard-league fantasy points per game to No. 1 running backs over its last six games. There's no doubt who the No. 1 guy is in Denver's backfield. I think Booker will snap his TD drought Sunday.

Is Ajayi wearing down? Forty-five yards on 18 carries against the 49ers was a little alarming. Or maybe that was due to the fact that the Dolphins were missing three starting offensive linemen. A couple of those players could return this Sunday, but they will have to fend off the Ravens' run defense, which has allowed just 66 rushing yards per game to RBs, 3.36 yards per carry, four total TDs and the third-fewest fantasy points per game to the position.

Week 12 saw a few fantasy receivers who weren't even targeted. Gates was one of them, which was quite shocking given his rapport with Philip Rivers. But the vet should rebound in a productive way versus the Buccaneers. Gates has scored in three of his four home games this year, and Tampa Bay has allowed 13 receptions and 175 yards to tight ends over the past two weeks. Like Brandin Cooks and Sterling Shepard, I think you will see Gates be fed targets in order to make up for last week's disappearing act.

Reed's owners should probably be hoping that he actually doesn't play this Sunday in Arizona. For one, he will clearly be limited by a bad shoulder, making him a risky start no matter what. But secondly, the Cardinals have allowed the fewest fantasy points to tight ends this season. They are the only team that has yet to allow a tight end touchdown. If Reed is out, which is currently seen as likely, Davis would step into a full-time role in a pass-friendly offense. But the matchup is much too tough for you to trust the 32-year-old with a fantasy playoff berth at stake.