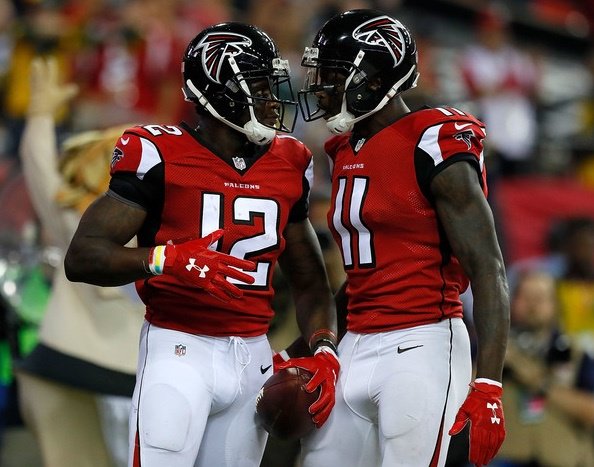 Here are the wide receivers and tight ends who have the easiest fantasy playoff schedules (Weeks 14-16), according to the strength of schedule chart on Scout Fantasy. We have already covered which quarterbacks and running backs have it easiest in those weeks, so check that article out here.

Well, that's a shame. Fantastic matchups and no one with which to take advantage of them. Scout Fantasy states that 49ers wideouts have the easiest playoff schedule of any group of WRs. They get to face the Jets, Falcons and Rams. And yet, who would you actually trust in any of those critical weeks? Torrey Smith? Jeremy Kerley? Quinton Patton? Let's just move on. This piece is off to a depressing beginning.

Matt Ryan has the second-easiest playoff schedule among QBs, so it makes sense that his wide receivers' matchups are just as tasty. Julio Jones and company will play against the Rams, 49ers and Panthers. Jones will remain one of the elite fantasy options no matter what, but this slate may mean that Mohamed Sanu is worth a shot if you are dealing with a lot of injuries late in the season.

If DeSean Jackson can get and remain healthy soon, he could finish on a high note versus the Eagles, Panthers and Bears, respectively, from Weeks 14-16. Of course, If Jackson stays sidelined, it's Jamison Crowder who could help a lot of people win their league. The slot receiver has accrued 37 fantasy points in standard leagues over his past three games.

Hunter Henry should also be mentioned here, but Gates has certainly regained his strong grip as the tight end leader in San Diego over the past two weeks. He scored in each of those games and should land in the end zone regularly versus Panthers, Raiders and Browns during the fantasy playoffs. Those three teams have allowed 19 TE touchdowns in their combined 26 games. That Rivers-to-Gates connection is going to be red-hot in the season's most crucial weeks.

Fiedorowicz is still widely available across all fantasy football platforms, but he has scored three times since Week 4 and has seen at least seven targets in each of his last four games. Given how much of a crapshoot this position is for fantasy purposes outside of the elite tier, more owners should be giving him a chance, if not now then definitely during Weeks 14-16. The Texans will take on the Colts, Jaguars and Bengals during that time.

You will have to pay a pretty penny in a trade for fantasy current No. 1 tight end, but it may be worth it. Olsen will line up against the Chargers, Redskins and Falcons during the fantasy playoffs. All of those teams are no better than mediocre versus TEs.