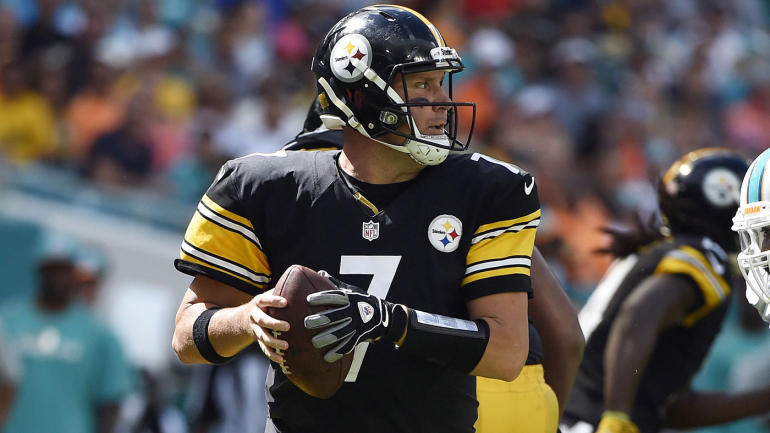 Here is what we know about the health of the many injured fantasy football commodities as of late Wednesday night leading into Week 9.

The Steelers have left the door open for Ben to play this week, and considering that he practiced Wednesday, we should expect that. He underwent surgery to remove the meniscus in his left knee just a little more than two weeks ago, but he's a tough dude who is not going to miss a game in which the division lead will be on the line. Play him if you've got him.

Smith has already been ruled out for this week due to the concussion he suffered last Sunday. That means Nick Foles will start for the Chiefs and although he played well versus the Colts, that's a downgrade for the entire receiving corps in KC.

Kessler has been cleared and practicing in full after missing Week 8 due to his own concussion. With that, he may very well start over Josh McCown against the Jets.

The Colts expect Hilton to practice Thursday after he sat out Wednesday's session, but according to Stephen Holder of the Indianapolis Star, Hilton wouldn't guarantee Wednesday that he would play versus the Packers. He is currently dealing with a hamstring history, the bane of a speedy wide receiver's existence. If he practices Thursday or Friday, expect him to suit up.

A knee bruise turned Julio into a decoy for much of the second half in Week 8. However, he was taken off of the Falcons injury report Wednesday and should be all systems go Thursday versus the Buccaneers.

Cooper has landed on the injury report for the first time in 2016 due to a back injury. He practiced in limited fashion Wednesday, so he's still on track to play versus the Broncos. But this bears watching.

A hamstring injury held Cobb out of Week 8. He began the week with a limited practice Wednesday, but he was limited last week, too. He might be a game-time decision versus the Colts but also strong start if we learn that he will play his normal amount of snaps Sunday.

Cobb's teammate was limited on Wednesday as well -- as he was for all of last week when he ended up being a surprise inactive. What we didn't know then is that he's currently fighting an illness related to his sickle cell trait. He hopes to play this weekend, but it's far from a sure thing at this point. Like Cobb, Montgomery would be a worthy fantasy start if he is active.

Right now, the Browns expect Pryor to play versus the Cowboys. However, he sat out Wednesday's practice due to the hamstring injury that's been bothering him for a couple of weeks. He is another guy whose status may not be known until Sunday morning.

If Pryor can't play, the impact of his absence would be softened by the return of Coleman, who hasn't played since breaking his hand during a practice prior to Week 3. The explosive rookie is back and should be considered a WR3 at least versus the Cowboys' banged-up secondary. His stock will go even higher if Pryor misses the contest.

Benjamin has a Grade 2 PCL sprain, something he's been dealing with for several weeks and will likely be held out of Week 9's game versus the Titans. That should mean more targets for Tyrell Williams, but ...

... Williams has his own injury issue. It's a knee injury, and he didn't practice Wednesday. However, he is expected to give it a go and will be on the WR2 map versus the Titans.

Although the Ravens are coming off their bye week and Smith hasn't played since Week 5, it doesn't look like the 37-year-old is over his ankle injury. He didn't practice Wednesday. That may change on Thursday or Friday, but SSS is a risk-reward WR3 against the Steelers, at best.

Shepard has scored in back-to-back games, but he probably won't make it three in a row as he is listed as doubtful for Thursday night's game versus the Buccaneers due to a hip injury. That means whenever Jameis Winston isn't locking on Mike Evans, he'll send more targets toward Adam Humphries and tight end Cameron Brate.

Charles' 2016 season officially became lost Wednesday when he underwent another operation on his right knee. His season is likely over and it will end with 40 yards and one touchdown on 12 carries. He is safe to drop in redraft formats.

Ware suffered a concussion in Week 8 and didn't practice Wednesday. With Charles out of the picture and Ware dealing with his brain injury, it looks like Charcandrick West could be a workhorse versus the pitiful Jaguars this weekend.

The man called Quizz has a sprained foot that will force him to miss Week 9 and probably longer. But the injuries don't stop there for the Bucs' backfield.

Martin still isn't ready to practice or play after aggravating a hamstring injury during Tampa Bay's Week 6 bye. Fantasy owners should continue to hold on to him because he could be a top-15 back whenever he's healthy. But I wouldn't have an issue with dropping Rodgers if you really need a player at another position. I think he is going to be out for two games at the very least, and I think Martin will be back by then. As far as Week 9 is concerned, Peyton Barber, Antone Smith and Mike James will handle this backfield. Barber is the most attractive for fantasy purposes, but this is going to be a committee, meaning none of the three are particularly strong fantasy options, even versus the Falcons.

The Bills are hoping McCoy will be on the field once the team begins its practice week Thursday. He's probably no better than 50-50 for Monday night's game versus the Seahawks. Mike Gillislee would be Buffalo lead back for a second consecutive week.

Although Booker left Sunday's game for a bit because of a shoulder injury, he returned and racked up double-digit fantasy points in what was still an underwhelming performance against the Chargers. He was limited in practice on Wednesday but should be fine for Week 9 against the Raiders. He is a locked-in RB1.

Although Hyde hasn't played since Week 6 because of a shoulder injury and practiced while wearing a non-contact jersey Wednesday, the 49ers expect him to return to the playing field Sunday. If that happens, he will be a high-end RB2 versus the Saints.

Coleman will miss his second straight game because of a hamstring strain. Devonta Freeman will be an elite RB1 versus the Bucs on Thursday.

McKinnon said Wednesday that he expects to play against the Lions, but those words came before he missed the day's practice. He has an ankle injury that sidelined him in Week 8. Matt Asiata would get another start and would be a plausible RB2 if McKinnon's not ready.

Here's another meaningful fantasy contributor who won't be playing Thursday night. Tamme was ruled out way back on Monday due to a shoulder injury. In his stead, rookie Austin Hooper will get more playing time and is a decent tight end streamer this week. He caught five passes in Week 8, and the Buccaneers allowed 13 standard-league fantasy points to Raiders tight ends last week.

Green is nearing his 2016 debut. He hasn't played yet after offseason ankle surgery landed him on the Physically Unable to Perform list. He may be active this weekend versus the Ravens, but the Steelers will play it safe with him. However, Green is someone to put on your watch list.

Allen practiced Wednesday, his first since sustaining a high-ankle sprain in Week 6. If he is able to play versus the Packers, both he and Jack Doyle will be touchdown-or-bust TE2 fantasy assets.

The second-round rookie didn't practice Wednesday due to a knee injury. Regardless, he is not worth using in fantasy right now after catching three passes for 30 yards over the past two weeks. Antonio Gates has reasserted himself as the Chargers' No. 1 tight end.