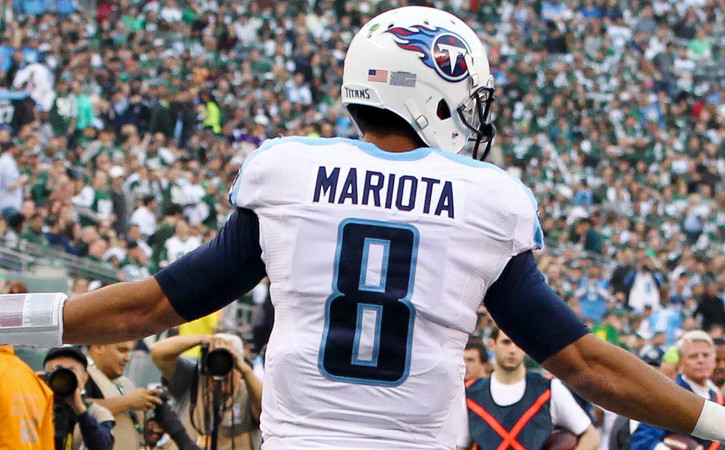 Fantasy Football: Week 7 Preferred Starts According to The Machine

It's Week 7, meaning we have basically arrived at the halfway point of the fantasy football regular season. No matter how you are faring, understand that there is a lot of time remaining for you to either make up ground in the standings or hold onto your playoff spot. You'll be on the right track to do either of those things if any of the players mentioned below are a part of your lineups Sunday.

Mariota has been solid gold for fantasy owners over the past two weeks, accounting for seven total touchdowns. The Machine thinks he'll keep right on rolling against the Colts. Yes, Indy has allowed the fourth-most passing yards per game -- and even made Brock Osweiler look like a competent NFL QB in the fourth quarter of their Sunday night loss -- but Mariota's recent surge has been due in large part to his legs. He gained at least 60 yards on the ground in Weeks 5 and 6 after rushing for a total of 72 yards through Tennessee's first four games. As long as Mariota continues being such a dual threat, he will keep producing gaudy numbers. The Machine has him slotted as the No. 3 quarterback for the week, behind only Tom Brady and Matt Ryan.

I wanted to highlight the Bears' Alshon Jeffery and the Packers' Ty Montgomery, who are ranked sixth and 17th, respectively, at their position by The Machine for Week 7. However, since both of those players will take part in Thursday night's game, I'll spill more ink on Williams. The Falcons will have a tough time dealing with Williams' 4.42 speed and overall athleticism. And while he is kind of a boom-or-bust player who has seen just nine targets over the last two weeks, you should expect him to boom against a defense that has permitted 14 receiving touchdowns, tied for third-most in the NFL. The Machine projects him to be the week's No. 19 WR. He is a fine start as a WR3.

I mentioned Rodgers in my waiver wire column last week, stating that even though Doug Martin is due to play after Tampa Bay's Week 6 bye, Rodgers is worth adding because he will be the team's passing-down back while Charles Sims is on injured reserve. Fast-forward to Wednesday, Martin is still battling hamstring pains. He's been ruled out, leaving Rodgers as the Bucs' unquestioned backfield leader for another week. When he filled that role in Week 5 versus the Panthers, he turned 30 carries (!!!) into 101 yards and caught five passes for 28 more yards. This six-year veteran isn't an explosive player, but with another big workload and a great matchup on the way (the 49ers have allowed the third-most fantasy points to RBs and seem to be getting worse each week at run defense), "Quizz" is well worth a start. To that point, The Machine projects him to be the No. 15 RB for Week 7.

Another season is in full swing, and the tight end position is still a point of frustration for many fantasy owners. If you don't own Rob Gronkowski, Greg Olsen, Jordan Reed (who is recovering from yet another concussion) or maybe Jimmy Graham, odds are you are streaming the position. Pitta, who is still available in about 30-40 percent of leagues, looks like a nice option for Week 7. He has seen 13 targets over the past two weeks and gets to face the reeling Jets next, a defense that has allowed the ninth-most fantasy points to TEs in standard leagues. Granted, Pitta is a better PPR choice, but he is The Machine's No. 8 tight end for those in non-PPRs.