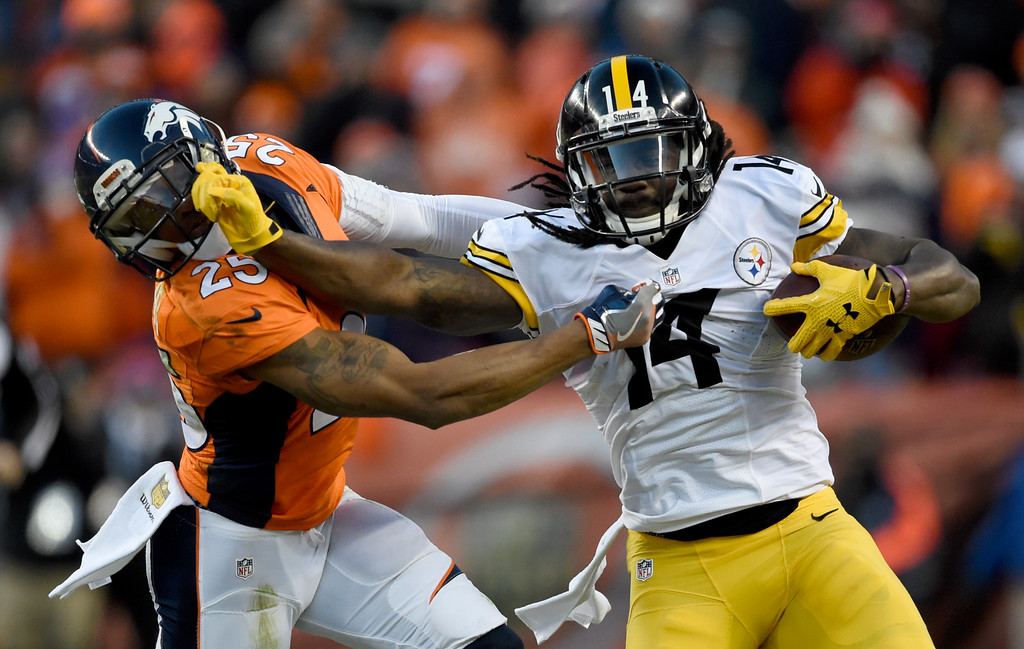 Big performances from young wide receivers and injuries at the running back position have created opportunities for players who deserve your attention. Let's get to this week's list of pickups.

Could Coates have scored four touchdowns Sunday? Yes. Unfortunately, he couldn't make a rather acrobatic catch in the third and, more egregiously, dropped a sure 1-yard score that hit him right in the hands during the second. Coates' hands have always been a problem for him (he also sustained a finger laceration during the game, so that was probably a factor as well), but his raw athleticism is special. Just look at his first target of the game, a 72-yard catch-and-run touchdown, as evidence. With 19 targets in the past two weeks, he has become the clear No. 2 wideout in a high-octane offense that already stresses defenses with Antonio Brown and Le'Veon Bell. Coates is a solid WR3 this week versus the Dolphins.

Full disclosure: I had never heard of Meredith until I was asked about him Friday on Twitter. But after what he accomplished in Week 5, every fantasy owner should know his name. The 6-foot-3 wideout caught nine of 12 targets for 130 yards and a touchdown. The risk here is that Meredith is just a one-week wonder, but with Brian Hoyer -- a decent add in his own if you need QB help -- looking like the Bears' starter for the foreseeable future, the connection those two have shouldn't be understated. Meredith certainly has Hoyer's eye more than Alshon Jeffery right now. Matchups against the Jaguars and Packers over the next two weeks make the second-year receiver very useful in deeper formats.

The Raiders' plan for their backfield without Latavius Murray was to create an even two-pronged attack. Richard and DeAndre Washington each took 14 touches versus the Chargers. What wasn't close was the separation in production; Richard gained 97 yards from scrimmage while Washington accumulated only 52. Sixty-six of Richard's yards came via his six catches. Murray, who sat out Week 5 due to a toe injury, is hoping to return for this week's meeting with the Chiefs. If he does, Richard should still have a role in this offense. And if Murray is inactive again, Richard will be worth flex consideration.

The 5-foot-7, 190-pound Rodgers touched the ball 35 times Monday night in Carolina. Thirty-five! That's 15 more than his previous career high and five more than the combined total over his previous eight games dating back to Septemeber 2015. He will never see as much work again, but the Bucs clearly trust him, and that's great news since he will likely have an every-week role going forward after the team placed pass-catching back Charles Sims on injured reserve earlier in the day. Although Doug Martin should return as the lead RB following Tampa Bay's Week 6 bye, Rodgers should be owned in all PPR leagues. He caught five passes and racked up 129 yards overall against the Panthers.

More research is needed, but there might be a running back committee forming in The Mile High City. Booker has seen his snap count increase each week this season, all the way up to 29 on Sunday. Meanwhile, incumbent RB C.J. Anderson played a season-low 36 snaps. Furthermore, the rookie's touch count has gone up two games in a row, and Anderson handled the ball a season-low 14 times in Week 5. That C.J. has averaged a mere 3.2 yards per carry since Week 2 might be the impetus behind the change. I've thought since the preseason that Booker was the best running back on this team. As Anderson falters, Booker is getting more chances to prove that thought correct. Buy this rising stock right now.

Eddie Lacy and the Packers are cautiously optimistic that he will be ready for Week 6 after a left ankle injury cut his Sunday night short. However, let's see how active Lacy is during the practice week. If the ankle doesn't respond well, Starks will be in line carry a full workload versus the Cowboys. Yeah, he's averaging just 1.8 yards per tote, but how many running backs who could possibly see 20-plus touches are available on your waiver wire?

It's often painful to watch what San Francisco calls "offense." Yet, it is worth noting that Kerley has seen 45 targets through five weeks; only 15 wide receivers have seen more. And as Blaine Gabbert dinks and dunks, Kerley is benefiting. He has scored in each of his past two games and has ended three of them with at least six receptions. Don't ignore this 49er; Kerley can be a weekly WR3 in PPR formats.