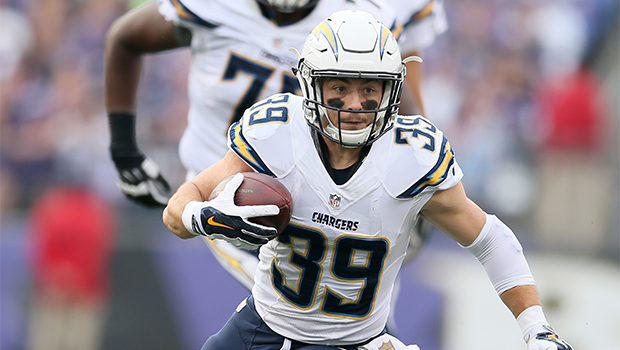 Get these guys into your fantasy football lineup. Do it. Right now. I mean, you want to win, right?

Derek Carr was in this spot last week, and I promise that I will not cherry-pick the quarterback who is facing the Saints each week for this column. But it's games like this one that is the reason why so many fantasy owners who selected Tom Brady drafted Manning as a fill-in during the opening month. The Giants were very balanced on offense against the Cowboys, but don't get it twisted: This is a pass-first team. Manning threw three scores on just 25 attempts in Week 1. With Drew Brees and the Saints' offense constantly putting up points and forcing their opponents to respond, look for Eli to air it out 40-45 times to his impressive WR trio: Odell Beckham Jr., Sterling Shepard and a healthy Victor Cruz. Manning is The Machine's No. 3 QB for Week 2, behind only Cam Newton and Brees.

Danny Woodhead: He's not just for PPR leagues anymore. Right or wrong, the Chadron State alum got two more carries than Melvin Gordon against the Chiefs last week. He gained 89 yards on those 16 totes while also doing his usual work as a receiver (five catches on seven targets for 31 yards and a touchdown). Woodhead was never handed more than 13 carries last season, but if he is going to average more than five yards per, the Chargers would be foolish to reduce his impact on a game, especially with playmaker Keenan Allen now down for the year. This week's opponent, the Jacksonville Jaguars, allowed 78 yards on 15 touches to Eddie Lacy in Week 1. I think that amount of work and production is Woodhead's Week 2 floor. The Machine projects him to be the No. 14 RB in standard formats.

With Demaryius Thomas beating up his balky hip, Sanders could be in line for a huge afternoon versus the Colts' defense. That's the same Colts defense which gave up 340 yards and three touchdowns to the Lions in Week 1. While the results from Sanders' first 2016 performance were middling -- five receptions, 49 yards -- it's important to note that he was Trevor Siemian's go-to receiver, leading the Broncos with eight targets. Sanders should be an easy start as a WR3. But with Thomas at well less than 100 percent, he is worth WR2 consideration. To that point, The Machine has ranked Emmanuel 23rd at his position for this week.

Five targets, three receptions, 42 yards, no touchdowns. Don't run away from Walker because of one bad game. He certainly wasn't alone; the tight end position as a whole underwhelmed in Week 1. Only two TEs who were owned in a majority of leagues, Dwayne Allen and Julius Thomas, accrued as much as eight fantasy points in standard formats.  It's a new week, and there are two key factors in Walker's favor. First, he is set to take on the Lions, who just permitted three touchdowns to tight ends on Sunday. And second is Titans head coach Mike Mularkey saying this week that the team should have done a better job of getting Walker more involved versus the Vikings. Thus, it sounds like an overcorrection is coming. Targets, receptions, yards, touchdowns -- expect Walker to improve in all of those categories against Detroit. He is the No. 4 tight end, according to The Machine's weekly projections.