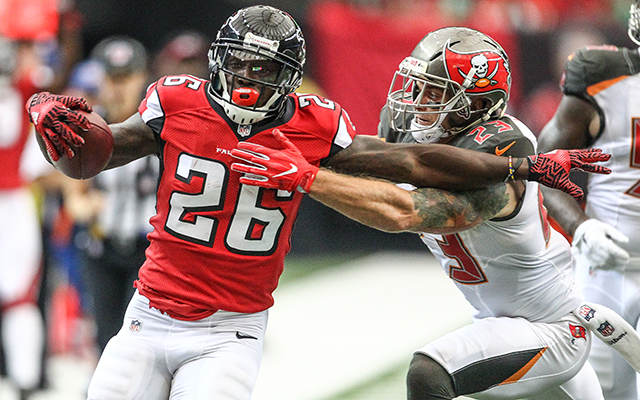 Week 1 is always the week for overreaction. Many players didn't live up to expectations, but that doesn't mean you should cast them aside immediately. Conversely, other players who had received much less fanfare shined. The challenge is to figure out which of those unheralded players will turn into season-long producers instead of one-week wonders; no one wants to spend half of their FAAB money on the next Frisman Jackson. However, I think these players are definitely worth your fantasy dollar.

Don't look now, but we may have a committee backfield taking shape in Atlanta. Devonta Freeman, a 2015 fantasy stud, handled just three more carries than Coleman on Sunday against the Buccaneers. Neither player averaged three yards per carry, but Coleman also caught five passes (one more than Freeman) for 95 yards. Don't forget that Freeman became a workhorse last year only after Coleman got injured early in the season. With him now healthy, it looks like both backs will have a significant role in every game plan. That's a tough pill to swallow for those owners who invested a second-round pick in Freeman. It also means that Coleman will likely have standalone value from game to game.

Has Riddick already turned in what will be his best box score of the season? That's very possible. He will not be scoring twice every week, and his 45 rushing yards versus the Colts were a single-game career high. But Riddick is going to have every-week value, especially in PPR formats. Riddick caught 80 passes last season, and it appears he could have a larger role this year with Calvin Johnson no longer around to dominate Matthew Stafford's attention.

Distraught owners mourning the loss of Keenan Allen and looking for a replacement should make sure that Fuller and the next name on this list aren't available. If they are, go get 'em. This first-round rookie debuted with five catches for 107 yards and a touchdown versus the Bears, and he was completely as-advertised. Fuller has great speed. You saw that as he darted around the field on his way to the end zone in the third quarter. Fuller has questionable hands. You saw that as he dropped a few passes, including one that should have been an 83-yard score. You take the good with the bad with rookies, but this one definitely has quarterback Brock Osweiler's eye, as Fuller was targeted 11 times. He will be an every-week WR3 as long as he gets that many chances.

Here's another young speedster who has the ability to provide a day's worth of fantasy points with one play. Dorsett hauled in four of his six targets for 94 yards versus the Lions. Yes, he is no better than the team's No. 3 wideout right now, behind T.Y. Hilton and Donte Moncrief. Yet if there was anything to take away from this game, it's that the Colts are going to throw A LOT. That will be necessary because their defense is horrid. Andrew Luck is going to be slinging it all over the yard each week (as long as his offensive line doesn't get him killed first). As such, this big-play receiver will keep seeing his fair share of looks and keep picking up yards in big chunks.