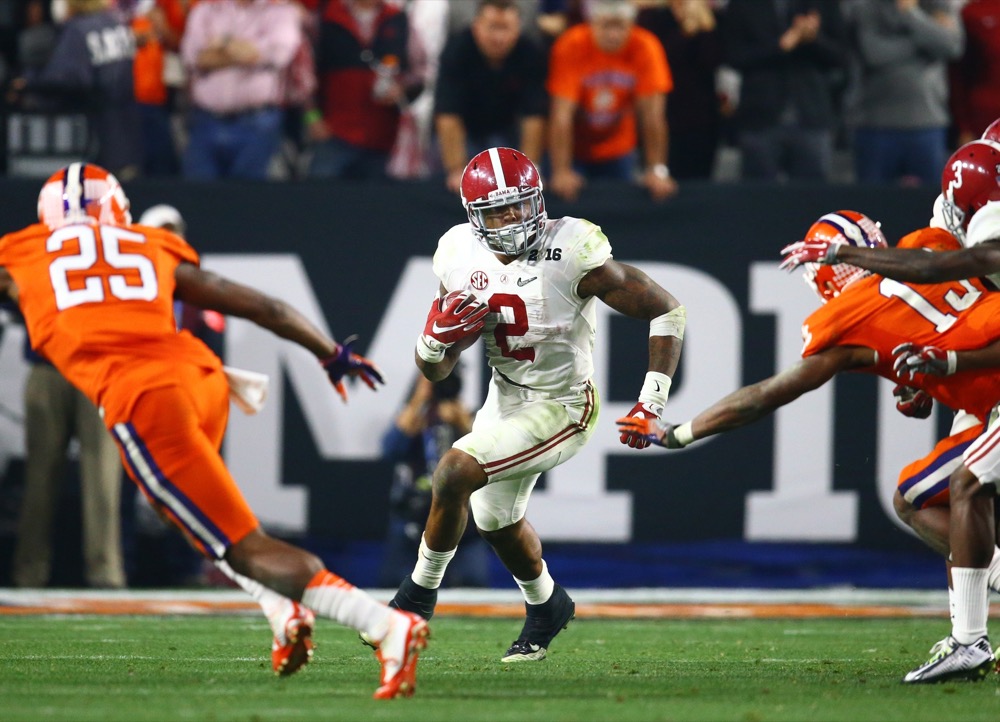 This year’s NFL draft was not loaded with much talent in the running backs department, but there are still ball carriers available to help your fantasy football team.

America’s team has a pretty crowded backfield with Elliott joining the likes of last year’s workhorse Darren McFadden and free agent signee Alfred Morris. So what. Owner Jerry Jones is clearly all in on the Ohio State back after spending the team’s highest draft pick since 1991. McFadden will be sidelined for the near future with a broken elbow and Morris’ production declined during his time in Washington. Elliott, on the other hand, is riding into the NFL off of back-to-back 1,800 yard rushing seasons with the Buckeyes along with 41 touchdowns in the 28 game span. The Cowboys offensive line is a dominating force and Elliott, a definite first round fantasy pick, will easily have a 1,200 yard season with double-digit scores.

With the football news of Marshawn Lynch’s retirement and Thomas Rawls’ broken ankle from last December, Prosise will be taking the majority of first team reps in training camp and could start the season if Rawls is not ready. Seattle is a favorable spot for running backs because of the element of read option they implement with Russell Wilson. As Prosise continues his transition from wide receiver, which will likely get him a lot of playing time on third down, he has the tools to develop into a feature back in Seattle which should go under consideration in dynasty leagues. If the news on Rawls’ ankle is not promising, Prosise could well be worth a seventh round pick in your fantasy league.

The Windy City has had the most unpredictable backfield situation since Matt Forte’s departure and Indiana’s own Jordan Howard will try to take advantage of that. Jeremy Langford is the predicted starter because of experience but he struggled to allude defenders last year which Howard happens to be a pro at given his outstanding vision. Originally a Alabama-Birmingham product, which probably would not scare too many NFL defenses, but what he did to Michigan’s stout defenders last year, 238 yards and two touchdowns, will be all the warning the pro’s need. Good fantasy running backs all have one thing in common: volume of touches. Thus, if Howard beats out Langford, Ka’Deem Carey, and others for the top spot on Chicago’s depth chart, then he will be a steal in the seventh round of your fantasy draft.

Justin Forsett is the Week 1 starter in the Charm City but coming off a broken arm and turning 31 in October may force the Cal product to give up carries to Dixon. In four years at Louisiana Tech, Dixon accumulated 5,452 scrimmage yards and a ridiculous 87 touchdowns. The 5-foot-10 back is an exciting NFL player that can make outrageous cuts and break ankles with big play ability. Dixon showed his ability to be a receiving threat in his last two years of college, accumulating 849 yards and 13 touchdowns, which will force the coaching staff to utilize him in more than just the run game. Grab the 22-year old in the ninth round or it might be too late.

Henry may have been the second back taken in last April’s draft, but he goes to Tennessee in a presumptive backup role behind DeMarco Murray. If Murray stays healthy, one reason why Henry ranks top five on this list to begin with given the former Eagles’ history, Henry is not a change of pace back and could see little playing time. Henry rushed for a whopping 2,219 yards and 28 touchdowns in his last year at Alabama but will be passed up for the likes of Antonio Andrews or Bishop Sankey on third down when a receiving threat is needed. At 240 pounds, Henry has the chance to get goal line opportunities and possibly even the bulk of carries if Murray’s struggles from Philadelphia follow him so spend a double-digit round pick on the Bama bruiser.