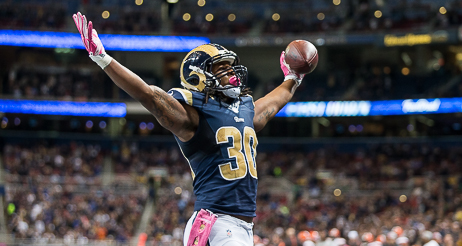 If the NFL could stage football games year-round, they totally would, and America would eat it up just as much as in September. Alas, in these dog days of spring, there is not a lot to talk about regarding our real national pastime or fantasy football. Yes, some teams have OTAs this week, but we are two weeks out from some mandatory minicamps opening and two months out from training camp. Until someone gets injured or Arian Foster signs, fantasy football is sort of in the dark.

So this seems like a perfect time to roll out some quick rankings. I will start by presenting my top 10 at the most complex and still most important position: running back. These ranks are based on a standard-league format. I should also say these ranks are subject to change because, again, it’s only May.

The Rams ranked 32nd in total offense last season, so they literally can’t get any worse with Jared Goff under center. Even with so much of nothing surrounding him, Gurley totaled almost 1,300 yards and 10 touchdowns in 13 games. He caught 21 passes as a rookie; I expect that number to go up.

Chris Johnson and Andre Ellington are still around to steal carries, but how can the Cardinals go away from this stud? Johnson is the total package. He averaged 123 yards from scrimmage through his final seven games as a rookie, four of which saw him given at least 24 touches. He can be and should be a true bell-cow back.

At the moment, I have faith that Bell will be healthy by Week 1. If that holds true, he’s an easy top-three selection. He had a 16-game pace of more than 1,800 total yards last season prior to tearing the MCL and the PCL in his right knee.

He is 31 years old, but that would only matter if Adrian Peterson was human. He clearly isn’t. He’ll get his 300 carries, his double-digit scores, 30-plus receptions and 1,500-plus yards. Despite the age concerns, he may be the safest RB to pick at the top of the draft.

I think there is a clear top four at this position, no matter the order. Past that, it’s a bit of an adventure. I’ll put Miller here because if he can put up more than 1,200 yards and 10 scores for a team that didn’t fully appreciate him, he will go wild in Houston’s run-heavy show.

So many red flags but still so good. Closing in on 30, Charles has to come back from another ACL tear, and he will have two productive players – Charcandrick West and Spencer Ware – nipping at his heels. But he was on pace for more than 1,700 yards from scrimmage and 16 TDs prior to the injury.

Elliot has a lot going for him in Dallas: A top-notch O-line, a quality offense surrounding him and a big stage on which to showcase his three-down abilities. The only negative? We don’t know for sure right now if he can actually play well at this level. Otherwise, he would be in the top three or four.

Far from his disappointing early days, Ingram now looks like the complete back few thought he could become. He has improved as a runner, sure, but the 50 catches last season really opened eyes. Any way the Saints get the ball in his hands is cool with fantasy owners. It would be great if Ingram could make it through a 16-game season; he’s done that just once in five years.

Martin got back to being a workhorse in 2015 and it paid off to the tune of about $35 million over five years. Hopefully the new deal doesn’t lessen his drive. If Martin is granted 321 touches again, he is going to score more than seven touchdowns, his total from last season.

Karlos Williams puts a low cap on McCoy’s touchdown potential, but Shady’s fantasy floor remains high otherwise. He will continue to gobble up the yards, and he’ll turn only 28 years old in July.