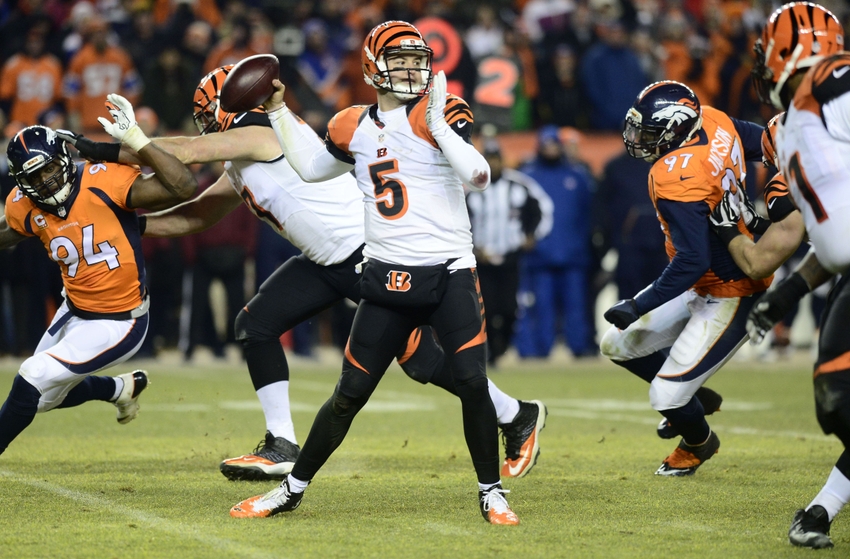 Week 16 QB Injury Round Up

AJ McCarron took over for the injured Andy Dalton in Week 13. Since then Cincinnati has been in the hunt for a first round bye for the playoffs. Though the Bengals have already clinched the AFC North Division, a win for Week 17 could give the team much needed rest time for recovering injured players. Dalton is a doubtful return for this week, and McCarron sprained his wrist in Week 16. Cincinnati has two other back up QBs on their roster, but considering the team’s position in the playoff hunt, McCarron will likely still play this week against the Baltimore Ravens. McCarron has thrown for 672 yards, 4 TDs, and 2 INTs over the past three weeks.

After a mediocre season, and the absence of QB Andrew Luck for 9 games, the Indianapolis Colts are still a contender for a playoff spot. In the weak AFC South division, the Colts are only one game out from the leading Houston Texans. However, the chances of the Colts going to the playoffs grew smaller with the injuries to QB2, Matt Hasselbeck and QB3, Charlie Whitehurst this past week. Hasselbeck suffered a shoulder injury and Whitehurst suffered a hamstring injury that placed him on the injured reserve. In need of a healthy QB that could lead the team to victory this Sunday against the Tennessee Titans, the Colts have signed three new QBs: Stephen Morris, Ryan Lindley, and Josh Freeman. Look for a game day decision to see which QB Indianapolis chooses to start for Week 17.

Brandon Weeden had a breakout game in Week 16, throwing for 200 yards, 2 TDs, one rushing TD, and 0 INTs. However, his career as starter might be short lived; Brian Hoyer is likely to play in Week 17 if he clears the concussion protocol. The Texans need a win this week to help secure their spot in the playoffs. However, the matchup this week against the Jacksonville Jaguars looks promising. The Texan defense has stepped up, and Hoyer threw for 293 yards and 3 TDs when the two teams met in Week 6.

There was talk this week saying that Peyton Manning might get to start in the final game of the season. However, this talk is likely false. Brock Osweiler will probably continue to play while Manning recovers from a foot injury that has had him sidelined since Week 9.

Drew Brees suffered a foot injury in Week 16, but is expected to play in the season finale against the Atlanta Falcons. If you are looking for a QB to start, Brees has had a tremendous turnaround. Over the past three games, Brees has thrown for 1,065 yards, 8 TDs, and 0 INTs. His numbers are likely to continue at the same pace against the weak Falcon defense.