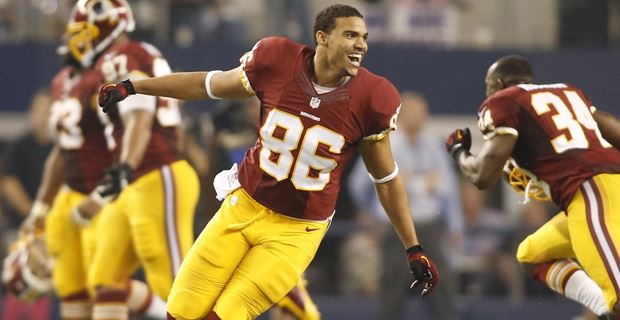 Jordan Reed- TE- Washington- Reed came in clutch again as he continues to prove that he is one of the best tight ends in the league. Reed hauled in nine of eleven passes for 129 yards and two receiving touchdowns as he once again shined as a focal point of Washington’s offense and QB Kirk Cousins’ frequent passes. At a fickle, often unproductive position, Reed has stepped up as a consistent performer during the fantasy playoffs.

Tim Hightower- RB- New Orleans- The late waiver wire add after Mark Ingram went down has helped fantasy owners during the playoffs, but probably won at least a few championships for owners in contention. The Saints leaned heavily on Hightower, handing him the ball 27 times and allowing him to gain 122 yards and score two touchdowns. Hightower also added three catches and 47 yards in the receiving game.

Brandon Weeden- QB- Houston- Those of you who had Brandon Weeden as the QB who would win you a championship, raise your hands. Not many of you, probably. Weeden completed 15 passes for 200 yards and two pass TD’s. Weeden also racked up 11 rushing yards and a TD on the ground, providing an immense help to desperate fantasy owners who may have taken a flyer on him. In TD-dependent leagues, his performance could not have been timelier.

Jerick McKinnon- RB- Minnesota- Adrian Peterson had an impressive day in his own right, but a handful of risk-taking owners may have earned major dividends by starting McKinnon. McKinnon racked up 89 yards and two touchdowns on just seven late carries in “garbage time” vs. the Giants. For PPR owners, the “Jet” caught two passes as well and added eight receiving yards.

Cameron Artis-Payne- RB- Carolina- Artis-Payne became a hot waiver-wire add after Jonathan Stewart went down and looked to be the lead back over the likes of Fozzy Whittaker and Mike Tolbert, but Whittaker jumped Artis-Payne in the running back hierarchy. Artis-Payne ran for 49 yards on just five carries, including one 31-yard run. He may get more time next week, but it’s likely too late for owners who took a risk in starting him.

Randall Cobb- WR- Green Bay- Cobb looked poised to bounce back this week vs. Arizona, but fell short as the Cardinals defense stifled Green Bay’s offense and held them to 8 points. Cobb only caught three passes and ended the game with 17 total yards in what has been an all-around disappointing season.

Martavis Bryant- WR- Pittsburgh- Bryant had a very favorable matchup against the Ravens and thanks to the high-powered Steelers offense, but hauled in just one of his three targets for six yards. Most of the Steelers passing game focused on Antonio Brown, although they only totaled 17 points in a loss to the Ravens.

Jason Witten- TE- Dallas- Witten has hauled in at least one pass in every game this season, but only totaled one catch for 12 yards vs. the Bills on Sunday. The Bills defense held the Cowboys to six points as Witten and the Cowboys continue to suffer without QB Tony Romo. Witten had caught five passes and reached the 40 yard mark in his last three games, but did not play as big of a role on Sunday. While he was dealing with a chest injury heading in, it did not look to affect him as much as the Bills defense did.