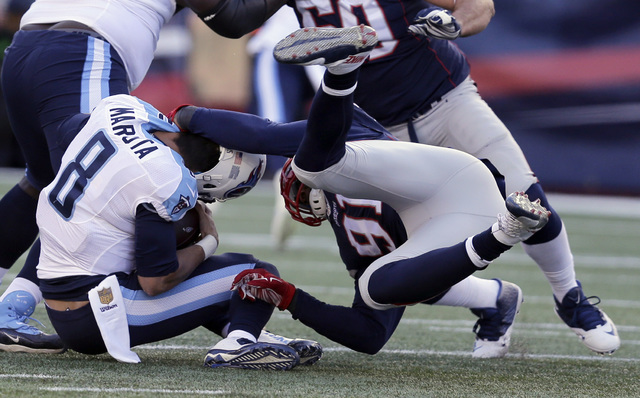 Week 15 Injury Round Up

Marcus Mariota is out for the season due to a sprained MCL. Zach Mettenberger will likely take over for the last two games. Mariota finished his rookie season with a completion percentage of 62.2%, throwing for 2,818 yards, 19 TDs, and 10 INTs. He also rushed for 252 yards and 2 TDs.

LeSean McCoy suffered a torn MCL last Sunday against the Washington Redskins. Though he is considered a week-to-week case, it is doubtful that he will be able to play this Sunday against the Dallas Cowboys. Backup RB, Karlos Williams, has been recovering from a shoulder injury that had left him sidelined for Weeks 13 and 14. He will be a probable start for Sunday and is a strong fantasy option for owners who need to replace the injured McCoy. On the season, Williams has rushed for 417 yards and 5 TDs. He has also caught 6 passes for 72 yards and 2 TDs.

Denard Robinson sprained his left foot last Sunday when he took over the starting role for the injured T.J. Yeldon. Yeldon is still overcoming a torn MCL that occurred in Week 14. Though Robinson is considered day-to-day, the RB situation in Jacksonville does not look good. The Jaguars signed Jonas Gray to pad the Jacksonvile backfield, but I feel like there are better options in the running game through waivers.

Adrian Peterson is expected to play this Sunday despite spraining his ankle in Week 15. He was able to play on his ankle during the game that it was injured. Overall, Peterson rushed for 63 yards, leading the ground game in the blowout win against the Chicago Bears.

A.J. Green played through a back injury last Sunday before leaving the field during the third quarter. Green is listed as probable for Week 16, but information regarding if he will suit up will likely come the day of the game. If Green is out, QB2 AJ McCarron will most likely look to pass to Marvin Jones, as TE Tyler Eifert is still going through concussion protocol.

Michael Crabtree suffered a concussion in last Sunday’s loss to the Green Bay Packers. Crabtree was able to return to the game and is expected to play in Week 16. Crabtree caught 6 passes for 70 yards last Sunday.