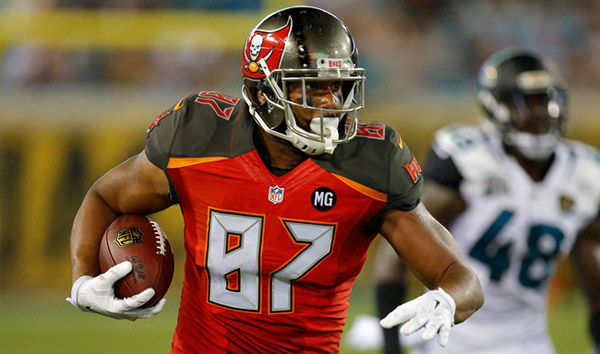 There is a decision to be made if you are looking to stream at quarterback this week: Tyrod Taylor or Jameis Winston? Both are well worth a start, but I favor Taylor, who has made fantasy news by coming off of consecutive three-touchdown performances as a passer. And those were against the Chiefs and the Texans, teams that supposedly have quality personnel at the backend of their defense. The Philadelphia Eagles, on the other hand, do not. They don’t have a healthy cornerback inside the top 60 of Pro Football Focus’ cornerback coverage rankings. Their No. 1 guy on that list? Rookie Eric Rowe. You might remember him looking absolutely lost while trying to cover Calvin Johnson back on Thanksgiving. As long as Taylor keeps chucking it Sammy Watkins deep down the field, he’ll become the latest quarterback to post big stats against a defense that has allowed at least 29 fantasy points to QBs in each of the past three weeks. Plus, with an average of about five fantasy points added per week on the ground, Taylor is a high-floor commodity with whom you should feel comfortable in your lineup.

If fantasy rankings were based on pure talent, Draughn wouldn’t be someone you want influencing your team’s playoff fate this weekend. Frankly, he’s not a fun guy to watch. But any running back who gets his hands on the ball 18-20 times per game is worth your time. Sure enough, since Week 9, Draughn has taken 20, 18, 20 and 18 touches in his four games as the 49ers’ starter. Furthermore, San Francisco has committed to him as its lead back – and at times, its only back. Draughn’s snap percentages in Week 11 and 12 were 91 and 100, respectively. That declined to 78 percent last week, but Draughn still came away with 14 fantasy points in standard leagues. He’ll go to battle Sunday against a Browns defense that has permitted the most rushing yards to opposing RBs this season. Yeah, Draughn is averaging just 3.25 yards per rush as a starter in San Fran. Yet, considering his workload and upcoming matchup, Draughn is definitely in RB2 territory for Week 14 and is an even safer bet in PPR leagues thanks to his 22 receptions since Week 9.

You deserve no blame if you have forgotten about Hurns. He didn’t play in Week 13 due to a concussion and in his two most recent outings prior to the brain injury, Hurns hauled in a total of seven passes for a meager 61 yards. However, Hurns has been cleared and is all systems go for this weekend’s matchup versus the Colts. Back in Week 4, in the middle of his seven-game scoring streak, Hurns put 116 yards and a touchdown on Indy’s No. 2 cornerback. That’s nothing new as teams have been repeatedly targeting their receivers playing away from Vontae Davis, who will surely shadow Allen Robinson this week. Hurns’ big effort in Week 4 came with the Colts’ regular No. 2 cornerback, Greg Toler, inactive due to a neck injury. Now, Toler was held out of practice on Thursday because of a knee injury, so Hurns may miss him yet again. But even if Toler toughs it out and suits up, that shouldn’t be a concern if you own the second-year big-play threat from Miami. According to Pro Football Focus, Toler is the 113th-ranked CB out of 118 qualifiers. From Weeks 8-13, such secondary WR facing Toler – Corey Brown, Emmanuel Sanders, Leonard Hankerson, Vincent Jackson, Martavis Bryant -- averaged a line of four catches and 72 yards per game. More importantly, Jackson was the only member of that group to not visit the end zone. No matter if Toler is in or out, chances are pretty solid that Hurns keeps that TD trend up in his return to play.

It’s low-hanging fruit, but when in doubt, go after players facing the Saints. Rob Ryan may be gone from that defense, but the horrible players remain. And the stats, especially when facing tight ends, back that up. New Orleans has allowed the most fantasy points to opposing TEs, including six touchdowns in the past four games. We don’t have a lot of numbers to go on with AS-J; he missed 10 games due to a shoulder injury before coming back last week and playing just 30 percent of the snaps versus Atlanta. He did catch three passes for 31 yards in that contest but also let a touchdown slip through his hands. In Week 1, Seferian-Jenkins registered 110 yards and two scores. He’s much too big and athletic for any Saints linebacker and/or safety to keep under wraps. I’ve already mentioned that I like Jameis Winston this week. He should be able to find AS-J for at least one short score at home.

Stay tuned to ASL for the best fantasy updates and most comprehensive sporting news!