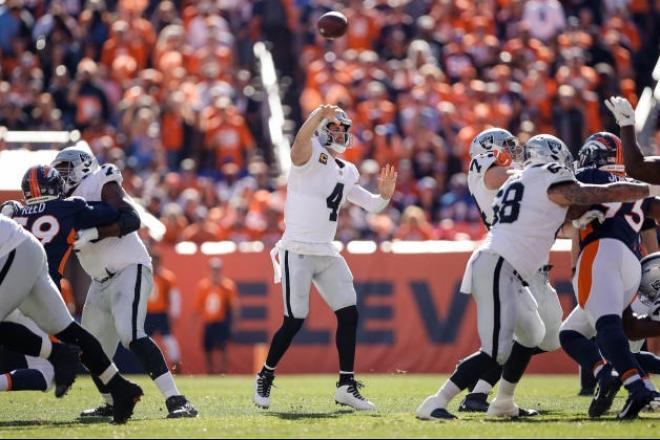 The season is dwindling down, but hopefully your team is heating up. If Kirk Cousins can make the greatest comeback in NFL history, then anything can happen in fantasy football. This year has been like all other fantasy years; an absolute roller coaster. It’s been fun, now let’s finish strong with these starts and sits.

After a dud in Week 14 against the Rams, Carr set a season high 3 TDs against the Patriots last week. Carr has made the list before and that’s because of his consistency. Yes he’s had some duds this year, but he’s scored at least 16 fantasy points in 9 games this season. He’s now playing the Steelers who have allowed the 3rd most passing TDs this season. Carr is available in 40% of leagues so if you need a guy steering the ship for the playoffs look no further.

It looks like the Chiefs have finally found a RB that they like using. They have been playing mix and match at the position all season and McKinnon has finally clicked. In the last three games, he has touched the ball 41 times accumulating 316 yards and 5 TDs. Now they play Seattle who has arguably the worst run defense in the league. They have allowed well over 2,000 yards rushing this year and 19 rushing TDs to go with it. He will be the number one waiver pick up this week, so hop on it while you can.

Another guy that’s firing on all cylinders at the end of the season is Zay Jones. Not only is his target share way up, but he’s also capitilizing on the increased opportunities. In the last five games, Jones has a whopping 51 targets. That stat alone makes him a must-start. Then you see that he’s averaged 83 yards a game over that span with 4 TDs and that's just the cherry on top. Trevor Lawrence has things clicking, and his receivers are reaping the rewards. Make sure he’s in your lineup.

Every week we talk about how inconsistent the TE position has been this season. It’s so inconsistent, Johnson is a top 10 TE on the season right now and he’s available in 80% of leagues. No one can stay consistent it seems. A stat that makes Johnson sound consistent, 7 TDs in the last 7 games. He has put up some duds this year but he’s the hot hand on that offense and his targets are there. Make sure he’s starting.

The Browns are riding hot after holding their bitter rival to only three points this past week. Now in three of their last four games the Browns have allowed 17 or fewer points. They have also forced 7 turnovers in the last three games. Matched up against a solid Saints team, who’s been playing well, but statistically they are clearly just a middle of the pack team. The Browns shouldn’t have any problems stopping both Taysom Hill and Andy Dalton throwing the ball. Over their last six games the Saints have been averaging just 14.5 points per game. With the playoffs on the line expect the Browns to step up at home. Make sure you have them starting.

I know I just talked about the Browns winning and now Watsons on my bench list. I didn’t say they would win because of him. I just don’t want you betting your season on a guy just because he used to be great. In three games to start his season, Watson is averaging 190 yards and has totaled just 2 TDs and 2 Int. With Watson being owned in over 75% of leagues, it is worrisome that he’s going to be in some lineups.  The Saints don’t have the best defense but they did hold the Falcons to less than 100 yards passing in Week 14. Watson might get things clicking down the road but I don’t think it’s this week. Keep him on the bench.

The rise of McKinnon has caused the fizzling out of Pacheco. With the emergence of McKinnon in the passing game, Pacheco has been limited to early downs. The problem with that is his touches are now being capped at about 15. Which is a lot different than just a few weeks ago when he touched the ball 23 times against the Rams. With only 7 catches in his last 6 games he’s turning into a TD dependent RB and that doesn’t bode well and this style of offense. Start McKinnon, bench Pacheco. Simple as that.

Seems like I’m picking on this game a lot. For good reason. You don’t wanna stick with a guy in the playoffs just because he got you to the playoffs. That’s case and point for Amari Cooper. For a solid stretch of the season Cooper was putting up top 10 WR numbers regularly. Then the Browns wanted to change their QB and everything else changed with it. After regularly getting double digit targets, in his three games with Watson at QB, Cooper has combined for 22 targets. The numbers sound even worse when he only accumulated 140 yards on those targets and not a single TD. This is not the same team with Watson at the helm and therefore Cooper is not the same player either.

If you read my previous articles, you know how much I can’t stand the TE position this year. The inconsistency is sickening. Coming into the week, Freiermuth was a top 8 TE on the year. Against a mediocre defense, Freiermuth did not receive a single target on 22 passes thrown. The TE position has been so inconsistent I’m putting in a vote in my league to play 2 defenses next year so I don’t have to deal with it again. Sorry for the rant but seriously with Mitch Trubisky in at QB, Pat should be on the bench.

Washington has actually put up some solid numbers defensively as shown by their top 10 ranking for fantasy. One thing they haven’t done well is stop the run. That doesn’t bode well against a team that’s already run for over 1800 yards on the year. They are also coming off a mediocre performance against the Giants where they were unable to force a sack or turnover. Up against a high-powered run game, I just don’t see any sense putting the Commanders in a lineup.