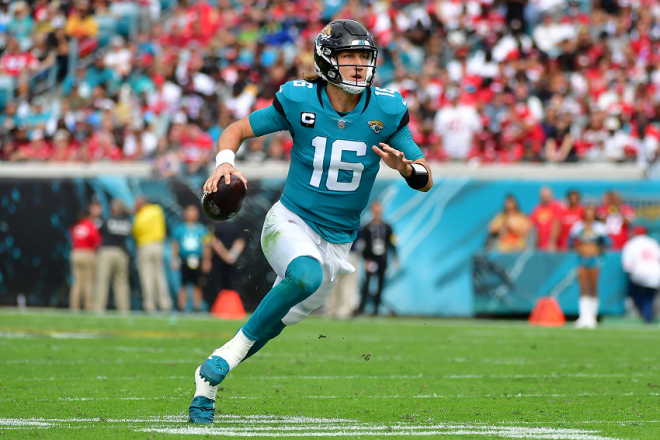 It feels unreal that it’s already Week 13. It’s even more unreal that the NFC East has a combined record of 32-13. Once again it’s just been a great year of football all around. If you are still sticking around for these articles that means the championship is still within reach. Let’s see if I can help you out with the starts and sits for this week. Here we go.

Lawrence started the year off slow, but to Jacksonville fans' delight he has taken some big steps forward. In his last three matchups, he’s combined for 815 yards 7 TDs and 0 Int. Now coming off his first game of the season with 300 plus yards and 3 TDs he’s now playing the Lions. Detroit has been easy on QBs this season, allowing 2859 yards and 18 TDs so far on the season. The Jags offense is coming alive and now have a great matchup. Start Lawrence with confidence as he will finish as a top 12 QB this week.

The Commanders are committed to the run and that makes both Antonio Gibson and Brian Robinson good plays. Not only are they running the ball efficiently, they are running with abundance. Over the last three games they have ran the ball 127 times. No, that’s not a typo. That’s averaging over 40 carries a game during that span. In the last three games Robinson has 59 carries for 248 yards a TD and a receiving touchdown. With Taylor Heinicke at QB expect the game plan to stay the same and effective against a Giants defense allowing a whopping 5.2 yards per carry.

Yes, I’m doubling down on the Jags this week. Zay Jones is a must start along with Trevor Lawrence. Jones had a career game last week with 11 catches for 145 yards. He’s now gone over 10 targets four times this season which is the same as DK Metcalf. The offense is picking up and Jones looks to be cashing in. In his last two games, he has a combined for 19 catches for 213 yards. Now, he’s playing the Lions who have allowed the 4th most points to WR this season. Make sure Jones in your lineup.

Nothing quite says dumpster fire like the TE position in fantasy. Seems like only the big names are consistent and the rest of the TE are in a frenzy of mediocrity. I always say chase the targets with TEs and that’s why Moreau makes the list this week. Over his last five games he’s totaled 23 targets and over 30 receiving yards in each of those contests, add 2 TDs during that span as well and your are looking at one of the top TEs over the past few weeks. He’s playing the Chargers this week who have allowed the 4th most points to TEs this year. Make sure Moreau in your lineup.

You might be thinking that Jimmy G is a good streamer play this week in a high scoring matchup. Well slow that thought process down. Yes the Dolphins and 49ers could be a shootout but that doesn’t mean you should play Jimmy G. If you take away his 4 TD performance against the Cardinals, it’s been a pretty blah season for him. He’s only gone over 2 TDs once this season and has only cracked the 300 yard mark once. Jimmy G is just an average game manager that won't translate well to fantasy. No reason for him to be in lineups.

Patterson is one of those guys that started off the year scorching hot and has yet to find that glory again since. After rushing for over 100 yards in 2 of his first 3 games it’s been just decent for Patterson. Outside those two 100 yards games, he’s yet to surpass 60 yards rushing. When you think of Patterson, you think of a Swiss Army knife but that hasn’t been the case of late. In his last four matches he’s combined for 7 catches for just 37 yards. None of these numbers scream starter to me. He shouldn’t be in your lineup this week against Pittsburgh.

Some would argue that Brown is a must start in an elite offense. Well I’m telling you he shouldn’t even be in your lineup this week. Yes, the Eagles are great but the offense has more mouths to feed than Fluffy from Harry Potter. Brown did get a TD last week, but in his last three games he has just 10 catches for 112 yards. He’s only got 23 targets in his last four games combined. Yes, he has a solid matchup against the Titans but the Eagles are a true running offense and haven't gone over 200 yards passing in three straight games. Brown is TD dependent and there are better options at wideout.

Dulcich is only a few week removed for making the start list and now he ends up here. Man, I hate the TE position in fantasy. After commanding targets before the bye week, it’s been the opposite since then. Just 7 catches in his last 3 games and only 12 targets during that span. During his three game hit streak he combined for 182 receiving yards. Now over his last three games he’s combined for 52 yards. Dulcich should no longer be in lineups.

The Colts have been playing good defense for most of the year, allowing more than 20 points just once in the last 7 games. They also have a streak of multiple-sack games with 8 in a row. All these numbers are nice but they shouldn’t be in your lineup against Dallas. The projections might be nice but like I mentioned before the NFC east is extremely competitive this year and the Cowboys are fighting for a playoff spot. Expect them to have a big game in front of their home crowd. Don’t start Indy this week.