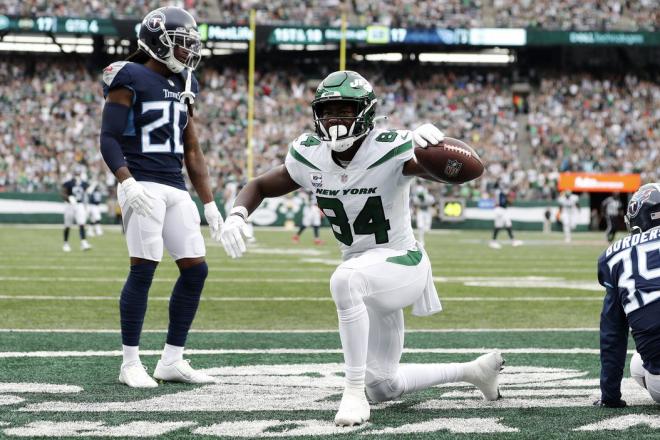 Move over, Mitch, it’s Kenny Pickett time. After 3.5 games of bad QB play, Mike Tomlin made the change to the rookie out of Pitt and he did not disappoint… well, kind of. Pickett came into the game in relief of Trubisky and technically didn’t throw an incompletion… if you count interceptions as completed passes – hey man, they were caught by someone. Pickett went 10/13 for 120 yards, 3 picks, but did score two rushing touchdowns. He is certainly worth a roster spot in 2QB leagues.

It was a sad day for many who bet on Javonte Williams as their #1 back this season. Williams went down with just about every single ligament tear in his knee, leaving Boone, Melvin Gordon, and Latavius Murray who was just signed Monday after a good showing in London. Gordon will most likely get first crack at the lead back role, but with his age and fumbling issues he could work himself right out of the job, and quickly.

Hopefully you listened to me two weeks ago when I told you to pick up Allgeier. You could’ve avoided the rush on the waiver wire this week! With Cordarrelle Patterson heading to IR for at least 4 weeks, Allgeier and Caleb Huntley will battle it out for touches in the Falcons backfield. Both backs performed well this week in a win over Cleveland – Huntley 10-56-TD / Allgeier 10-84 & 1-20… but I give the edge to Allgeier.

The situation with Amon-Ra St. Brown should be monitored before plugging Josh Reynolds into your lineup, but Reynolds has been a consistent contributor to a Lions offense that is leading the league in both points per game (35) and yards per game (437). Grab Reynolds if you need help at WR.

Yes, I know, this breaks my 35% rule… BUT, if Pickens is on your waiver wire grab him immediately. Rookie WR’s always take a little bit of time to get into a groove and it’s about that time for Pickens to take off. With Kenny Pickett seemingly stepping into the starting role, going forward the Steelers passing game should improve… Pickett is a dynamic playmaker and should be a focal point going forward along with Diontae Johnson.

Fool me once, shame on me… fool me twice… look, fool me once I don’t get fooled again. Averaging just under 7 targets per game, Corey Davis has quietly remained in the top 25 WR’s in fantasy this year through 4 weeks. Davis is a great option for anyone needing a WR.

Making the most of his 3 targets per game, Dissly has become quite the consistent option at the tight end position. With Geno Smith playing out of his mind, Dissly should be on radars in all leagues, especially in standard formats.