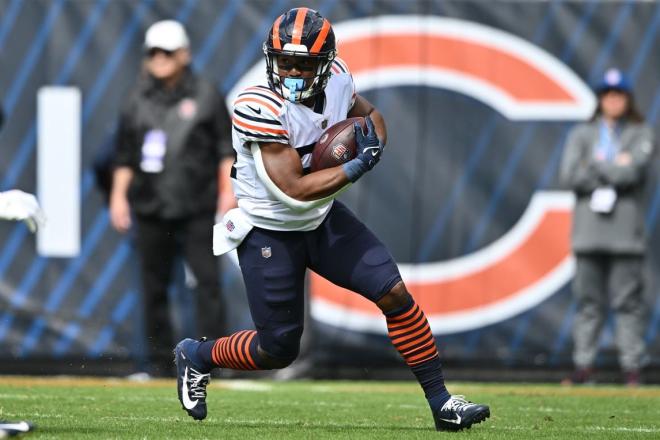 I don’t like repeating myself, but I will (this was a Week 1 recommendation). Khalil Herbert exploded this past weekend with 169 yards on 22 total touches and two scores. David Montgomery exited the contest and is trending towards out for a Week 4 road matchup against the Giants. Herbert, in my opinion, is the more complete back of the two and this might be his opportunity to take the RB1 role on the Bears and run with it.

I have written in the past about handcuffing your assets. You don’t drive uninsured, you don’t leave your house uninsured… why treat your 1st or 2nd round running back any different? I assume everyone who read that Dalvin Cook chose to forgo shoulder surgery this offseason already has Mattison stashed on their bench… but for those who don’t, grab him immediately.

An uptick in targets over the last two weeks (8 & 10) has seen a great return in production for the 29-year-old speedster from UNC. With Hunter Renfrow out, Derek Carr seemingly just throws to guys who occupy the slot and Hollins benefitted, bigly. Hollins caught 8 of 10 targets for 158 yards and a touchdown. Grab Hollins, especially if Renfrow misses more time.

With Trevor Lawrence looking like he almost deserved to be the #1 pick last season, Jones benefited with 10 catches on 11 targets and a touchdown in a big win over the Chargers. Christian Kirk will remain the top guy, but Jones is only 3 targets behind Kirk this season – 27 to 24. He’s worth a roster spot for anyone needing receiver help.

I don’t know why McKenzie isn’t rostered in 75% of leagues. He is a slot guy in one of the most high-powered offenses in football. Obviously, Stefon Diggs dominates the target share in Buffalo, he literally doubles the next highest guy on the list… which ironically is McKenzie. There is zero chance that trend continues and Josh Allen will start spreading the ball around more… look for McKenzie to be a priority add this week.

Second on the team in targets on a team that will be throwing the ball all season? Yes please. The thinnest position in football has a TE #4 on 88% of leagues waiver wire. Conklin hasn’t just had one or two games with a plethora of targets, he’s gone 7-9-8 which is all owners can hope for… consistency.