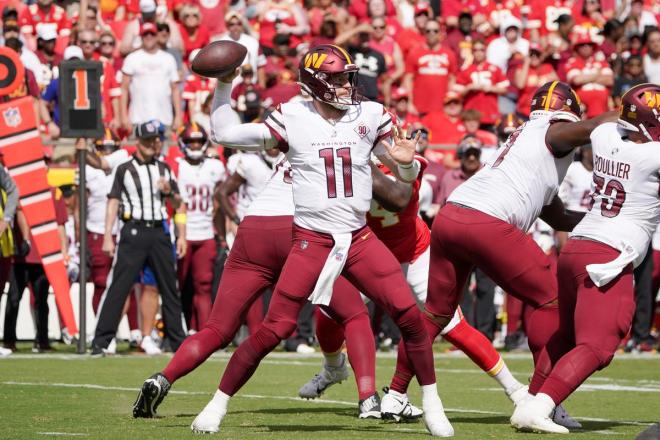 Well, it’s only Week 3 and the league is already going wild. Big upsets all around and just an overall crazy week of football. Hopefully you won fantasy and weren’t stressing out too much, because it's time to look forward. It's time to set your lineup for Week 3, so let’s jump right in to the starts and sits.

Yes, I’m doubling down on Carson Wentz. He’s now made the start list in consecutive weeks and for good reason. He’s already thrown for 650 yards and 7 TDs. The talent surrounding him is why I think he could finish this year as a top 10 fantasy QB. His WR trio of Terry McLaurin, Curtis Samuel and Jahan Dotson have all shown up on the stat sheet this year. This is clearly the best supporting cast Carson has ever had and it could help him revive that 2017 MVP form. Start him against his former team and think about locking him in as your QB1 for weeks to come.

This is truly a split backfield, but Pollard is the clear receiving back as shown by his 9 targets already this season. I think his upside shows more with Cooper Rush as QB. Lots of safe throws and dump offs with the backup QB. Add his target share with big play ability (shown by a 46 yard catch last week) he is a solid start this week playing a Giants defense that’s already given up over 200 yards on the ground this year.

Coming into the year, it was thought Kyle Pitts would be the number one target in Atlanta. Well, it’s clearly been Drake London through the first two games. Already racking up 19 targets and over 150 yards receiving, Drake has quickly gone from a risky flex play into a solid WR2. This week will be no different when he faces a mediocre defense in Seattle. Drake is a must start.

If a tight end gets targets, then he should be in your lineup. Higbee has answered that call with now 20 total targets through the first two games. Higbee looks to be Matt Stafford’s favorite target behind Cooper Kupp.  With TEs once again all over the place, this Rams TE feels like one of the safer plays early on this season. Start him this week against a struggling Cardinals defense.

After matchups against the Bengals and the Buccaneers, the Cowboys defense has yet to give up more than 20 points this season. They aren’t a turnover machine they were last year, but they have been playing some solid defense along with 8 sacks already this season. They are matched up against a Giants team that’s winning games but they still have Daniel Jones at quarterback. Start Dallas with confidence this week.

Derek Carr in fantasy is the definition of “ok”. No he wont fall on his face and get you 5 points but is also less likely for him to scorch the earth for a 30 plus game. He had the perfect opportunity to do so this last week against the Cardinals and finished with a meh performance. His numbers are solid and he’s got good weapons, but I think their are over a dozen options better than him and that is why he shouldn’t be in your lineups.

Through the first two weeks CEH has put up eye raising numbers that makes you hopeful for his future. Then you take a look closer and it makes you a little nervous. He only has 22 total touches through the first two contest and that is worrisome. Pair the low touches with a matchup on the road against Indy and I just see many better options than CEH this week.

The talent is there for Juju and he's on a great offense. But he is just too risky to play week-to-week. Patrick Mahomes has already thrown the ball 74 times and Juju only has 11 targets. Even with Tyreek Hill in Miami there are too many weapons for Mahomes to trust Smith-Schuster in your lineup. Add in the fact that he hasn’t scored a TD since 2020 and there are just too many signs saying keep him out of lineups.

Albert O. could not build off his Week 1 performance finishing with 0 catches on only 2 targets. With him being owned in over a third of leagues, many have high hopes for him in the future, especially with future Hall of Famer Russell Wilson as his QB. I’m not saying later in the year he won’t build a connection with Russ, but as of right now he should not be in your lineup until his target share goes up and is constant.

I feel like I have to put this here because they are the top defense on the waiver wire this week. Do not pick up the Houston Defense. Don’t even think about it, honestly. Yes they have in enticing match up with Chicago but that’s just bait. They have been a bottom tier defense for 3 straight years and not much has changed. The Bears might not run up the score but Houston won’t make any big plays either. Safe bet is to find another D.