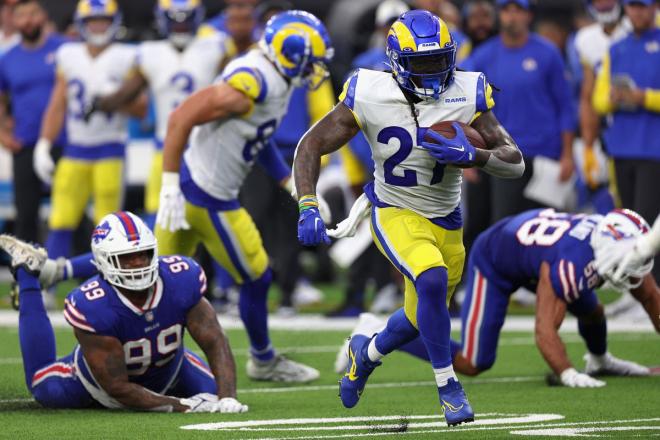 It was a pretty solid week of football to start off the football season. We got to experience some wild games and only a few injuries across the board. Hopefully you won this week and you're not a Cowboys fan. Now onto the next matchup on your schedule. Here are my starts and sits for Week 2.

After an entire offseason of getting absolutely flamed from Jim Irsay and the media, Wentz wasn’t on many fantasy owner's radar. Well, I’m here to tell you he’s a must start this week. In Week 1, Wentz didn’t play perfectly, and as you might expect, he had a couple of turnovers. To make up for it, he finished the game with 4 passing touchdowns; including two absolute dimes for scores to come back and beat Jacksonville. Wentz is the first Washington QB to throw 4 TDs in his debut since Billy Kilmer in 1972. Wentz has the best wide receiver core he’s ever had and now he’s going up against a Lions team who just gave up 38 points to the Eagles. Expect Wentz to get even more comfortable in the offense this week and finish as a top 10 QB.

The Rams backfield has been a tricky one over the past few season because it’s always a running back by committee. In most leagues, Cam Akers is rostered while in over 50% of leagues Henderson is available. Jump on this opportunity while you can. Watching Akers in the Bills game, he clearly isn’t fully healthy and also not the clear RB1. Henderson on the other hand had a solid game against a great defense. Finishing with 14 carries and 5 catches. If he keeps up that workload, he immediately jumps into the RB2 conversation. Play him this week against the Falcons who just gave up over 150 yards on the ground against the Saints.

Chark is now a few years removed from his pro bowl season in Jacksonville, but after a solid performance during Week 1 action he might have found a resurgence in his career with Detroit. He is the WR2 behind Amon-Ra St. Brown, but the 26 year old is best suited in this role. He is slated to go up against the Commanders mediocre secondary that just let Trevor Lawrence throw for 275 yards. Put him in your lineup as he will see his fair share of targets from Goff and possibly another TD this week.

It’s early, but it already looks like it might be another rough year for the TE position in terms of scoring. That’s why I say chase the volume. So Pat Freiermuth makes the starts this week after having double digit targets in Week 1, seeing exactly ten. Even with Mitchell Trubisky bringing the tight ends value down a little, he could turn into his favorite target. Pat is a must start this week against the Patriots and could turn into a set-it-and-forget-it at TE due to the slim picking at the position.

Pittsburgh is available in nearly 40% of leagues and should be picked up immediately after looking dominant against the former AFC Champs. The TJ Watt injury is worrisome, but the defense as a whole is still a top ten unit going up against the Patriots. Mac Jones could miss this week as well and even if he played, he’s going to be in a hostile environment and make multiple mistakes. The Steelers are must start.

Yes I know it’s Aaron Rodgers and I know we started off slow last season, but he should indeed be on your bench this week. Rodgers is a great quarterback, but bottom line is that his weapons might be the weakest in the league. Chicago played well last week against the 49ers and I could see this game being a nasty divisional defensive game. There are multiple better options at QB this week.

Personally, I wasn’t touching Elliott at all this year and if you do have him, then he should be on your bench this week. The 27 year old running back is no longer a lead back. Backup running back Tony Pollard finished with only 3 fewer touches than Elliot against the Buccaneers. Elliott has also failed to have a run over 30 yards since 2018. He has turned into a touchdown dependent running back and he’s going up against the Bengals defense who just held Najee Harris to a modest performance.

Coming off a Week 1 two-touchdown performance, you might think about starting Thomas this week. He played well against a poor secondary and now this week it pretty much flips. He’s going up against the Buccaneers who embarrassed the Dallas offense on primetime TV. I would pump the breaks on playing him this week until he strings a few games together or has a more favorable matchup.

I can’t think of many other wasted talents in the league than Njoku. He’s still with the Browns and they just have him taking up space on the field. He finished Week 1 with only a single target. He still gets drafted because of his potential, but Cleveland uses him like a decoy on Sundays and in that case he should not be in you lineups. Until he sees consistent volume he’s one of the riskier plays at TE, even more so with Jacoby Brissett behind center.

This is an enticing match up on paper. A young up-and-coming defense against a quarterback who turns the ball over at a high rate. Don’t be tempted by this streamer defense and keep them on the bench. They held Jacoby Brissett to a modest game but gave up over 200 yards on the ground. After Saquon Barkley’s performance in Week 1, the Giants will continue to feed the hot hand. Best to keep the Panthers on the waivers.