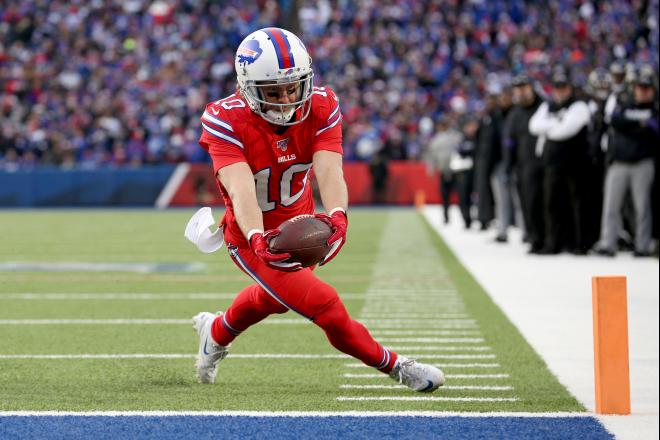 The season is winding down. Just like all things amazing, time flies when your having fun. Whether you are in the playoffs or playing for top seed in your draft next year in your consolation bowl, almost everyone still has something to play for. Let’s run down the few injuries we had this week that have big playoff impact.

Terry Mclaurin left the game with zero points after hitting his head hard on the field. He is still in the concussion protocol but there is a possibility he might play this week. Taylor Heinicke also left the game with an knee injury but there’s optimism he will be good to go this week as well. However, if McLaurin is out, DeAndre Carter could be a beautiful fantasy play for the upcoming weeks. Carter is loved in that locker room and has been given many opportunities with Curtis Samuel being banged up majority of the year. He’s been getting just about 5 targets a game when Samuel is hurt but that could be even higher if McLaurin is out. He also leads the league in kick return yardage along with one kick return touchdown. You could also look at Chris Humphries, but I believe he’s a riskier play. If JD McKissic is back this week from his concussion he could also warrant flex consideration.

Cole Beasley has been a risky play all year but with Sanders being banged up with an injury he becomes almost a must start. After getting 11 targets this past week, Beasley has now seen double digits targets in 5 games this year. He only has 1 TD on the year and has finished with 20 or less yards 4 times. He’s The definition of a boom or bust player. With this high powered offense and a top target out with the playoffs in sight, if Sanders is out, start Beasley. Simple as that.

Kareem Hunt is one of the few back up running backs in the league that still starts in your lineup week in and week out. Well, that isn't entirely true, as Hunt could miss a few weeks with an ankle injury. D’Ernest Johnson has had some big games this year when both Chubb and Hunt miss action, such as his 150 yard game against Denver. Johnson should be picked up and the situation monitored. I wouldn’t start him until it’s seen how much he is used as the RB2. Peoples-Jones is a more certain player to be picked up. He’s owned in less than 10 percent of leagues and could be the spark plug your team needs. With Hunt out, Peoples-Jones turns into the team's big play weapon. Going up against a bad Raiders secondary next week, Jones should be in consideration for a flex play.