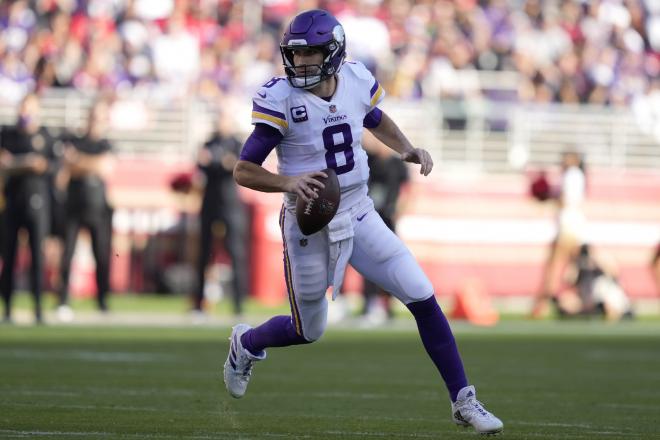 Thought I’d start the article off by tooting my own horn. Last week's article I got 7 out of my 10 predictions right. I’ll take 70% any day of the week. The best thing about this for the reader is, if I steer you in the wrong direction, you have someone to blame for if you don't make the playoffs. Yes, the playoffs are so close you can almost smell them. We will lead you in the right direction in our Week 14 Starts and Sits. Here we go!

No, this isn't the same article as last week. Yes, Captain Kirk has made the start list in back to back weeks. You know why? Because people need to be aware of his play this season. Yes they just gave the Lions their first win of the season but that wasn’t Kirk's fault. If I showed you stats with no name and they read, 12 starts, 25 TDs, 3 Int, and 279 yards per game, that guy would be in your lineup. Well that man is Kirk Cousins. He may have a losing record in his career but he will help you win this week Thursday against Pittsburgh.

It’s been a rough year for CEH, he’s been banged up and when he does play it’s not what most hoped. Things change this week as he will help you make the playoffs and rush for his 3rd 100 yard game of the year. When CEH came back into the lineup it was assumed it would be a split backfield between him and Williams. In the 2 games back since injury, CEH has had 26 carries compared to only 10 from Williams, so that’s a good sign. Another good sign is they host the Raiders this week who have given up 1,500 yards rushing this season and the 3rd most fantasy points to RBs. It might feel risky, but play CEH.

Terry McLaurin has been in a little bit of a slump the past few weeks but he will make up for it with a monster game against Dallas. Terry wants to be the Cowboys killer and he is well on his way. In 3 career games against Dallas, he’s had 19 catches for 244 yards and 2 TDs. It also helps that the Cowboys have given up the fifth most receiving yards this season along with the 3rd highest yards per catch. With Logan Thomas out and Taylor Heinicke completing 77% of his passes over the last 4 games. McLaurin is a must start.

Outside of the top 4 TEs, it’s pretty much a coin toss at this point of the season for a solid TE. Well this week my coin lands on Gerald Everett. Since the bye week 4 weeks ago, Everett has had over 27 targets. He is matched up this week against a Houston defense giving up the 7th most points to TEs this season. With Everett’s target share combined with a poor Houston defense, start Everett this week if you aren’t feeling your current TE in your lineup.

Doubling down on Seattle against Houston this week. The Seahawks are a bottom 5 defense this year in fantasy but they can help you get the W this week. They have allowed just 16 points per game over their last 6 along with forcing 7 turnovers during that span. Now they are playing a Houston offense who is dead last in both passing yards and rushing yards this season. The Seahawks defense is a long way from the legion of boom, but they just might be the spark that gets you a win this week.

After completing just 24% of his passes last game, somehow Cam is back as the starter this week against Atlanta. Yes it’s a juicy matchup against a terrible Falcons defense but it’s a trap. If you shut down Cam in the run game you shut his entire game down. Cam is just to risky of a play. He’s only thrown for 300 yards once in his last 15 games. Yes, he has a rushing TD in the 3 games he’s been back but he’s only rushed for 65 yards in that span. He might run for a TD this week but also might only complete 7 passes with that. Keep him out of your lineup.

After the first 6 weeks of the year James Robinson looked like a sure fire RB1. Much has changed since the Week 7 bye and now in Week 14 he should not be in your lineup. In his last 5 games he’s only averaging 43 rushing yards a game, combine that with limited usage in the passing game it’s not looking good for Robinson this week. He’s up against a solid Titians defense who has given up the 6th fewest points to running backs and also only 3 rushes over 20 yards this entire season. Sit him.

After catching 13 passes for 139 yards and 2 TDs week 1, it seemed like Cooper was gonna have a monster year. Well it’s been decent at best. He’s only gone over 100 yards receiving twice. In his other 8 games he’s averaging just 43 yards and 3 catches a game. Combine that with only 1 TD over his last 5 games, and it shows just how much of a down year it has been for Cooper overall. Then factor in that they are playing a Washington defense who is somehow playing like a top defense even without their best player Chase Young. The Football Team defense has given up just 202 passing yards a game over the last 4, while playing Brady, Wilson and Carr during that span. Expect Cooper to be shut down and keep him on the bench.

Tyler Higbee entered the season as a hot topic at TE. With Stafford coming to town there were thoughts of him being a top 10 tight end with upside. He's still making lineups even after never having more than 5 catches in a game all year. He’s also had only 1 TD in the last 7 games. The bottom line is that there are too many mouths to feed in LA. Combine that with a matchup against Arizona who has given up the 3rd fewest points to TEs this year. All signs point to keeping Higbee out of your lineup.

Another top 5 defense on the sit list this week. Dallas has thrived off turnovers all year, with 19 interceptions on the year, with 4 just last week. Well they are going against a Washington team with a playbook straight out of the 80s. Over the last 3 games they have averaged 37 minutes of time of possession which is 2nd in the NFL.

They also have only thrown 2 interceptions over the last four games. With time of possession against them and a QB that’s playing some very safe football, count this defense out this week.