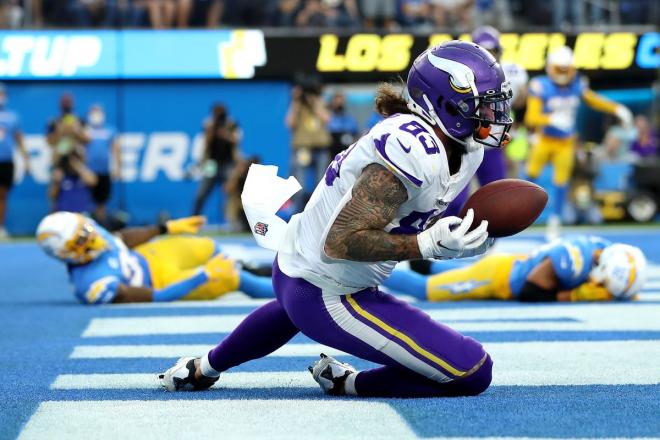 There are two seasons of the year. Half the year it’s football season and the other half it's I’m waiting for football season. It’s wild to think there only a few weeks left and what a season it has been. Hopefully you are on the top looking down. I’m here in the final weeks to break down a few injuries and who to pick up to help guide you to a few last wins.

I got pretty lucky on Sunday. Something in my gut told me to take Thielen out of my lineup and I did so right before the game. He then got hurt in the first quarter. He left the game and could be out a couple weeks. Obviously, great news for Justin Jefferson owners as he will ball out the rest of the season. The biggest opportunity is Tyler Conklin at tight end. I’ve gone over and over about how unreliable tight ends have been this year but if Thielen sits out, Conklin becomes a must start. He had a season high 9 targets this week, averaging just under 6 targets the past 6 weeks. Kirk has been flinging it all over the field this year, averaging 36 attempts a game over the last 4 games. Now, the riskier play is Osborn who will be the WR2 in the offense with Thielen out. He might be a good option to pick up just in case Thielen is out for an extended period.

This week overall was extremely light on injuries to key players in fantasy so we have to do a little nitpicking. Both Higgins and Mixon finished the game Sunday but both left with lingering injuries. Mixon tweaked his neck and Higgins banged up his ankle. Both are expected to be good to go next week. If that’s not the case then the only person of interest would be the forgotten man of this offense, Tyler Boyd. Last year he was on everyone’s roster but with both Chase and Higgins taking over the offense, Boyd has been an after thought. If Higgins misses anytime, Boyd bumps up to a sure fire flex play. He has been boom or bust the majority of the season but the Bengals are in the hunt for the playoffs and will be on full attack on offense. Keep an eye on the Bengals injury report this week.

Just when Sanders has his best game of the year, he re-injures his ankle in the fourth quarter. Now with the Bye week coming up he could be good to go after the bye. If that’s not the case, Kenneth Gainwell could get the start, who finished this week's game with 12 carries for 54 yards and a TD. Now, the Eagles the Washington Football Team Week 15 so I wouldn’t start Gainwell then, but play the Giants at home Week 16 and if Sanders is out play Gainwell at the flex and hopefully he will boost you to a playoff win.