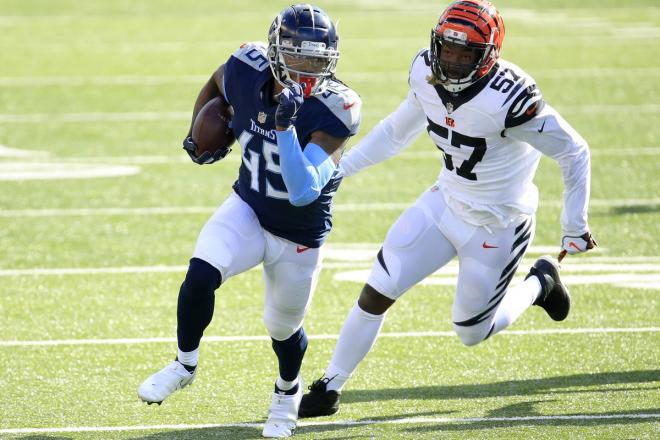 Chris Collinsworth owns a majority share in some company that grades NCAA and NFL players on their performance. They even give out waiver wire advice to “premium subscribers.” I can’t remember what the company is called exactly… but they wanted me to tell you that you should pick up Rhamondre Stevenson this week following his 100 yard 2 score performance this past weekend. If only someone recommended Stevenson last week before Damien Williams came back and will take carries away from him. Oh wait… I did that.

Sorry, I just find it hilarious that people actually charge for that kind of lazy content. Anyway, here are 6 players to target heading into Week 11!

Some of you may know I am a Browns fan, so this past weekend was a tough one for me. One of my friends said “Mac Jones looks like Tom Brady out there!” Let me be clear… Mac Jones does not look like Tom Brady, no way! My wife totally agrees with me too. Playing like a young Tom Brady? Maybe, but LOOKING, no way. Anyway, Mac Jones has been putting up solid numbers, has a genius coach/offensive coordinator, blah blah blah… I am so sick of the Patriots. Go grab Jones.

Ah yes, Jimmy G, the former heir apparent to Tom Brady. Garoppolo is quite frankly a totally different QB when he has George Kittle on the field. In yesterday’s win against the Rams he looked like the savior the 49ers traded for back in 2017. If you need a bye week replacement, look no further than Jimmy G.

Hands up on this one… a couple weeks ago I wrote about Jeremy McNichols and Adrian Peterson. If you remember, I didn’t really like either one of them… apparently neither does Mike Vrabel. People forget that Foreman was in line to take over for Lamar Miller in Houston before some injuries and issues with being late to team meetings. Foreman looks like the clear favorite to head this backfield, but perhaps wait one more week before inserting him into lineups.

The waiver wire sensation of the year Cordarrelle Patterson does not look like he will be able to go this Thursday against New England after spraining his ankle in the blowout loss to the Cowboys. Gallman looks like the clear lead back if Patterson cannot go… and you can start him confidently. This is a Patriots team that just gave up 17.5 to D’Ernest Johnson, which included 7 catches.

Let’s all be honest… Julio Jones is not meeting Titans fans or fantasy owners expectations. Jones was scratched this past weekend with a hamstring injury, clearing the way for Marcus Johnson to grab 5 passes for 100 yards on 6 targets. Someone has to catch the ball opposite A.J. Brown… grab Johnson if you have a spot.

So I use the same format in all of my articles… so this week is pretty nice because I am once again asking you to pick up Dan Arnold. Not only should Arnold be rostered in any 12 person league, he should be in a starting lineup. Since Week 7, the average target leaders at the TE position go like this…

Those are the games elites, Dan Arnold is right in the middle of them. If you haven’t already, grab Arnold.