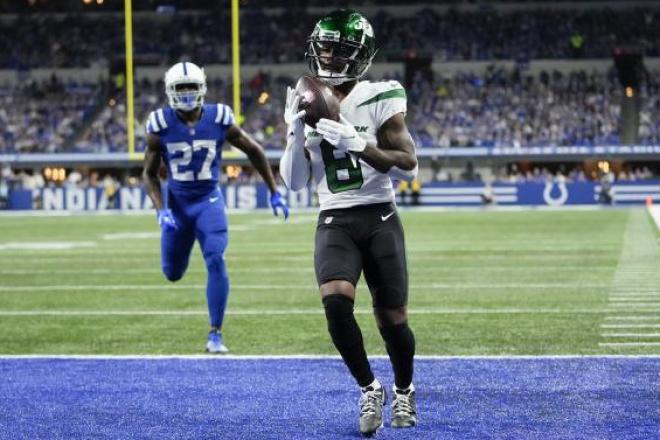 So when I started writing for Advanced Sports Logic I made it my goal to never have someone read my articles and waste their time because everyone recommended is no way available in any league that’s competitive. I never understood it… if someone is looking for waiver wire advice odds are they are serious about fantasy football… seeing other outlets that charge a subscription fee for this advice then suggesting Devin Singletary (58% owned) and Hunter Renfrow (70%) just seems lazy.

Anyway, rant over… it’s hard to believe how fast the season is going! Here are 6 players you should target heading into Week 10...

When Miles Sanders went to IR the popular waiver adds were Kenneth Gainwell and Boston Scott. Who would’ve thought Jordan Howard would have emerged as the RB dominating carries? With 12 carries last week and 17 this week, Howard has put up 128 yards on the ground, averaging 4.4ypc, and has scored 3 times. Now… buyers beware… Howard did just play two teams in the bottom 3 in points allowed to opposing RBs… he has a much tougher matchup this week against the Broncos who just shut down the high-powered Cowboys offense. Even still, any starting back in the league is worth adding, especially in Week 10.

This is a situation to monitor as Damien Harris was forced out of Sunday’s game with a head injury. If Harris is unable to go, Stevenson would appear to be the next man up. Again, be cautious and look elsewhere if possible as the Browns are in the top 7 of defenses against opposing RBs.

The casual eye test would tell you to go add Olamide Zaccheaus… however, I’m still sticking with Russell Gage as the top guy for the Falcons with Calvin Ridley out indefinitely. Why? Targets, Targets, Targets. Zaccheaus caught 3 passes and scored 2 times… but on 3 total targets. The pecking order in Atlanta will remain Kyle Pitts, Cordarrelle Patterson, then Gage.

Since the Jets Week 6 BYE, only Jamison Crowder (22) has been targeted by Jets QBs more than Elijah Moore (20). The difference between Crowder and Moore is that Crowder has not scored in that time while Moore has scored 3 times. Averaging just under 7 targets a game in his last three on an offense that has thrown the ball over 40 times per game in that span? Sign me up.

Ok so I am immediately contradicting myself with the target theory… but that is okay and I’ll tell you why. The departure of Odell Beckham Jr. left Baker Mayfield with Jarvis Landry, Rashard Higgins, and Peoples-Jones. In his last 3, DPJ has averaged just under 4 receptions, 86 yards, and a score… he’s the true downfield threat for the Browns, evident by his 23.4ypr over that stretch. Last year when Beckham Jr. went down with a torn ACL, Mayfield played marginally better with DPJ serving as the main beneficiary.

I sound like a broken record here, but the position is thin… he’s the most targeted player on the team since the Week 7 BYE… and his team is going to be throwing the ball A LOT. But really… Arnold has been a solid contributor in the pass game for the Jaguars. Grabbing and playing Arnold won’t win you a ton of games, but it won’t lose them for you either. He is a solid option and in PPR formats should figure between 8-12 ppg going forward.