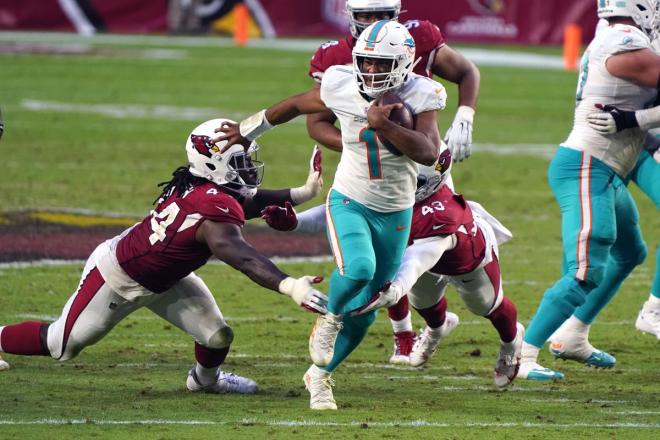 What a week. Who would have guessed Brady, Burrow, and Cousins would have lost their matchups against backup quarterbacks. Or I guess from a different perspective, who would have thought that in Week 8 we would’ve seen Trevor Siemian, Mike White and Cooper Rush all win their games. Crazy.

I guess at this point, for those who read this article you know that whatever defense I pick, you can count on the opposing team to break records. But I’ll stop complaining and instead live up to my word. After my Week 7 Broncos vs Case Keenum pick, in Week 8 I told you all to play the Bengals defense vs Mike White and the Jets. I said word for word, “If Mike White beats the Bengals defense this week, I think I’ll start outsourcing the defensive starts and sits.” Well, think no more. This week, I outsourced my defensive start from ASL’s free DFS Lineup Explorer.

Now, let’s get into our Week 9 Starts and Sits.

Since coming back from injury in Week 6, Tua has been great for fantasy. With Gesicki, Waddle and Gaskin catching passes out of the backfield, Tua has the weapons to return value this week. He also has the ability to add a few points on the ground, which helps secure his floor. That’s all without mentioning he faces the 28th worst defense against opposing fantasy quarterbacks.

Moss and the Bills weren’t their usual selves last week. But a matchup with the Jags might fix that. Moss is still the lead running back in this backfield and he will get to dominate the rushing attempts against a bad defense in a game where the Bills are projected to be ahead a majority of the game. Volume is king in fantasy, and Moss has a chance to reward those who play him, especially given his touchdown upside against the Jags defense who has allowed the third most rushing touchdowns so far this season.

As stated with Tua, the Texans are allowing opposing offenses to throw and run all over them. It’s the 8th easiest matchup for fantasy wideouts.

Parker suffered a setback at practice Friday afternoon and is now doubtful for Sunday's contest against the susceptible Texans secondary. With this news, teammate Jaylen Waddle becomes a strong WR2 and could finish this week as a WR1. The Texans secondary is allowing opposing receivers to run rampant and Waddle should absolutely reach the double digit target threshold. With his incredible RAC (run after catch) ability, Waddle should be in fantasy lineups for Week 9.

We are going deep into our tight end start Week 9. Cook shares the field with a lot of weapons, so his targets are usually capped around 4 or 5. So, there is risk here. But for those without Hockenson this week, the waiver wire might not be so friendly in the tight end department. This week, however, Cook’s 5 targets will go a long way versus a Philadelphia defense who simply can’t stop opposing tight ends. The Eagles have afforded opposing fantasy tight ends the tenth most yards, most touchdowns given up and fourth most fantasy points. Cook has high upside and will be worth the risk this week.

As stated, this week our defensive starts and sits come from ASL’s free DFS Lineup Explorer.

The Steelers defense isn’t quite what it was last year. But this is a matchup made in heaven. The Bears offensive line is one of the worst when it comes to pressure rate allowed, and Steelers on the other hand, are in the top half of pressure rate against opposing quarterbacks. That equals sacks! The Steelers are lacking in the secondary. The good news? The Bears do not and cannot throw the ball. The Steelers are a terrific play this week, especially for DFS players.

Matt Ryan just lost his best weapon in Calvin Ridley. For how long? No one really knows. But what we do know is Matt Ryan only has one weapon he can rely on down the field, and that’s Kyle Pitts. Not a bad person to rely on. But for defenses, it just got a lot easier to stop Matt Ryan and this passing attack. I think head coach Arthur Smith and crew will need to figure out a game plan that doesn’t involve their best weapon on the field, and this will be a bad week when doing such a thing. The Saints are the 3rd hardest matchup for opposing fantasy quarterbacks. Look elsewhere in Week 9.

I would put Robinson here, but the likelihood he plays this week is slowly diminishing as we speak. IF Robinson plays, you’ll have to start him, but temper expectations. If he doesn’t, I would not look to Hyde as a reserve piece for your fantasy lineups. The Bills defense is too good against opposing running backs (not named Derrick Henry) and currently rank 1st against the position. With their emergence and coach Urban Meyer's love toward Jamaal Agnew growing ever fonder, Hyde won’t be able to salvage a good day for fantasy managers.

Meyers is known for two things, having a good fantasy floor but very low upside. He still hasn’t caught a touchdown so far in his career (maybe I’ve reversed his curse now?), and I wouldn’t expect him to against fantasy’s 8th ranked defense against opposing wideouts. Plus, the game plan for the Patriots will look to establish the run and bully the linebackers with their tight end Hunter Henry, which will ultimately be how they win this game in Charlotte.

Kittle should be back this week, and when he comes back leave him on your bench. I know, it’s hard to do. We’ve been waiting for his return. But he isn’t 100% and like I said about Gronk, Kittle will be a decoy more than anything. He will get a few targets, but they won’t be very valuable when he faces fantasy’s hardest matchup for tight ends. The Cardinals haven’t allowed a single touchdown to the position and have allowed only 225 yards so far on the season (25-yard per game average). But, if you have to play him, as most of us do, temper expectations.

No, the Broncos aren’t here because of what they did to me in Week 7… maybe. But seriously, the defense lost their best pass rusher in Von Miller and are still without Bradley Chubb on defense. The pass-rush won’t be there which means Amari Cooper and Ceedee Lamb on the other side of the ball will have plenty of time to create separation, and that’s not what you want as a defense facing the high-powered Cowboys offense. Plus, you know, Zeke.