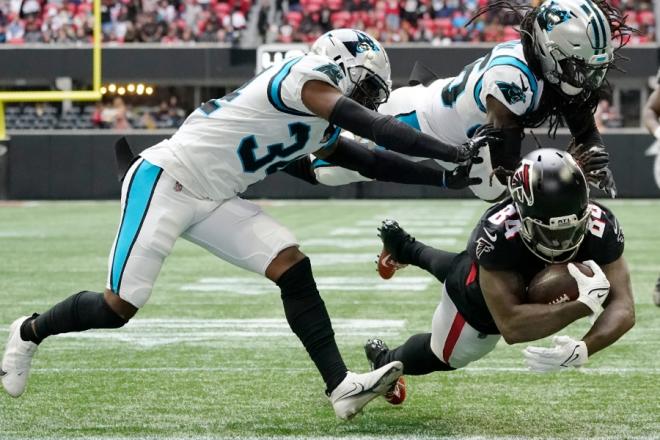 I fell In love with the game of football at a very young age. I grew up watching guys like Ray Lewis, Patrick Willis and Sean Taylor, who just absolutely obliterate people at the point of attack. Defense is the reason I love football; Seeing a guy come across the middle and get speared and the ball flying out, now that’s football. However, the rules have changed over the years due to injuries and concussions, which means tackling has to be a lot more technically sound in today's game to avoid getting fined or flagged. There were a handful of these plays in the Falcons Panthers game yesterday. Most notably a hit on Robbie Anderson that brought me back to my childhood. He caught the ball on a crossing route and soon as the ball hit his hands Erik Harris laid the boom on him with a perfectly placed hit that was so hard it was shocking and no flag was thrown. No flag was thrown because it was a perfectly clean hit, and that’s how the game should be played. Sorry to rant but we all know we miss devastating hit sticks and that tackle just brought me back. It had me getting my article ready early with Robbie Anderson on the early injury report because the hit was so hard. Thankfully no players were harmed on the play and my rant is over, please let me walk you through the major injury’s of the week.

Wow, outside of Christian McCaffrey this is by far the biggest injury of the year. King Derrick Henry is likely out for the rest of the season after receiving foot surgery this week. This is a major blow to Henry owners. I haven't seen anyone get this amount of carries on a regular basis since Larry Johnson with the Kansas City Chiefs in 2006 when he got 416 carries. Henry had outscored everyone so much this season that even after missing the next two games he will still be a top 5 RB. Perhaps the majority of fantasy owners rejoice because Henry has been winning games single handedly for other fantasy managers all season. Now, who to pick up? Well the obvious choice would have to be backup RB Jeremy McNichols, even though he’s only got 7 carries on the season, he has been the clear 3rd down back with 21 catches on the season. The entire offense is going to change for the Titans, but McNichols jumps into the high-end RB3 to low-end RB2 conversation due to him being the main back in Tennessee... for now. The Titans immediately signed Adrian Peterson to the team, he may miss the first week and get eased into the offense the following week, but season long AP is a must add for running back needy teams. The person benefiting most from this right now will be AJ Brown. He is now the best weapon on the field for this offense and just had his first double digit target game of the season. Look for him to get 10 plus targets on a regular basis now as he is a must-start and a clear WR1 rest of season.

Just when you thought the news couldn’t get wilder from Sunday, star receiver Calvin Ridley retires due to personal reasons. This is an absolute gut punch to owners with Ridley, who was most likely your number one receiver. Hopefully, you were smart enough to take him out of your lineup as he pulled out of the game just an hour before it started. For me, this makes Cordarrelle Patterson a set-it and forget-it player in 2021. Honestly, I’ve been talking about a fallout from Patterson for weeks, but he continues to score and secure valuable touches. He will be the clear guy the Falcons will want to get the ball to and I would not be surprised if he ended up with over 15 touchdowns on the year. Tajae Sharpe is also an interesting pick up. With a season high 6 targets on Sunday, Sharpe is the closet thing the Falcons have as a true receiver besides Kyle Pitts. Sharpe will average about 6-8 targets a game now and should be a nice flex play with upside.

Other than the two huge names going down the rest of the league was kind of quite. James Robinson is day to day after a heel injury. If the injury holds him out, Carlos Hyde is an absolute must start. I say this because wherever Hyde goes, he goes as a backup and then shines whenever the starter goes down, whether it be Cleveland, Houston, Seattle or Jacksonville. When Hyde has his number called, he plays well. He’s a classic power back that is averaging just under 4.5 yards a carry the last 3 seasons, tack on 10 TDs during that span and you got a guy that plays hard every time he’s called on. If Robinson is out. Start Hyde. Simple.