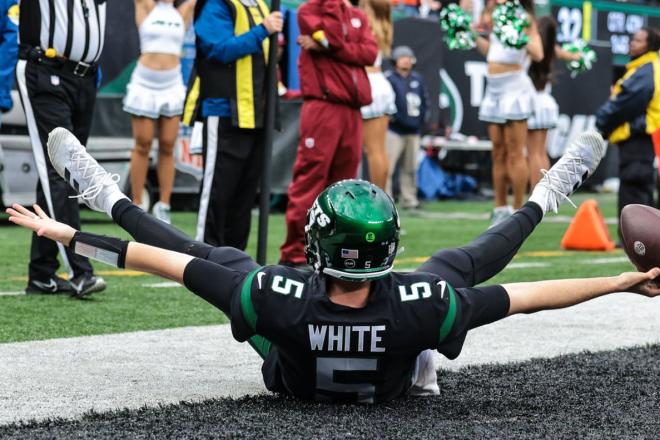 I don’t remember a season where the waiver wire week in and week out had players who could change the course of your season. This week is no different… with a devastating injury to Derrick Henry, this week could be one of the most important weeks on the waiver wire this season. Here are 7 players, and 1 “keep your eye on,” to target heading into Week 9!

Mike White took the NFL by storm this past weekend after the Jets stunned the Bengals 34-31. After throwing 2 interceptions in the first half, White exploded in the second half for 3 touchdowns as the Jets came back from a 31-20 deficit to beat the Bengals. White finished with 405 yards, 3 touchdowns, and 2 interceptions. Head Coach Robert Saleh has already confirmed White will start this week against the Colts. Don’t expect the same level of production, but White is certainly worth rostering in deep formats and/or 2-QB leagues.

In this past week's loss to the 49ers, Justin Fields finally looked like the QB the Bears expected when they took him in the first round of the NFL draft. Fields finally broke through with his legs, putting up 103 rushing yards and a touchdown. He also completed 19 of 27 passes for 175 yards, one score, and one interception. In standard formats running QBs are always valuable, look for Fields to gain some confidence after this past week and turn his season around.

No one, and I mean no one, can replace what Derrick Henry brings to an actual football team let alone a fantasy team. The good news is that you don’t have to worry about the Titans winning games, just about how much production they can get out of who is up next on the depth chart. McNichols is my pick to get the most touches following Henry’s injury. Yes, the Titans did sign 36 year-old Adrian Peterson, but McNichols has a more “all-around” skill set as he can catch passes out of the backfield. McNichols is a must-add this week.

As mentioned above, Peterson was signed to the Titans roster following the injury to Derrick Henry. I can see why there is hype around this signing, I’m just trying to be realistic here in what anyone grabbing Peterson on waivers this week should expect from him. I honestly do believe Jeremy McNichols has the higher ceiling of the two, but any opportunity to add a starting RB is one any fantasy owner should take.

The injury situation with James Robinson is key here to determine if Hyde is worth a roster spot. If you have space, add him, if you don’t… don’t worry. Even if Robinson is out, Hyde has a tough matchup against a Bills defense that has been the toughest against opposing RBs. If James Robsinon is your RB1, obviously Hyde is a must-add, but look elsewhere for production.

Ever since D.J. Chark was lost for the season DB turned WR Jamal Agnew stepped up nicely. In his last 3 games he has had 7, 6, and 12 targets. He has converted all those targets into 17 receptions for 157 yards and a score. For a team that figures to be playing from behind a lot this season, Agnew could be a trustworthy WR3/4 in PPR formats.

With Eric Ebron out, Freiermuth has been targeted 14 times in the last two games, falling only behind Diontae Johnson. Pittsburgh, and their fans, love this guy. The rookie made an impressive catch for a touchdown this past Sunday in a win over the Browns… look for Ben Roethlisberger to continue to develop a rapport with the young TE. And again… at the thinnest position in fantasy football… you know the rest.

Jameis Winston is out for the season with a knee injury. Trevor Siemian saw his first real action in over 2 years and actually played well… holding off the Buccaneers at home and getting the win. HOWEVER, it is worth noting Sean Payton is in love with Taysom Hill. No matter if he is under center, split out, or in the backfield… it is almost a guarantee that Hill will be involved a lot more going forward… he may even take the starting job.