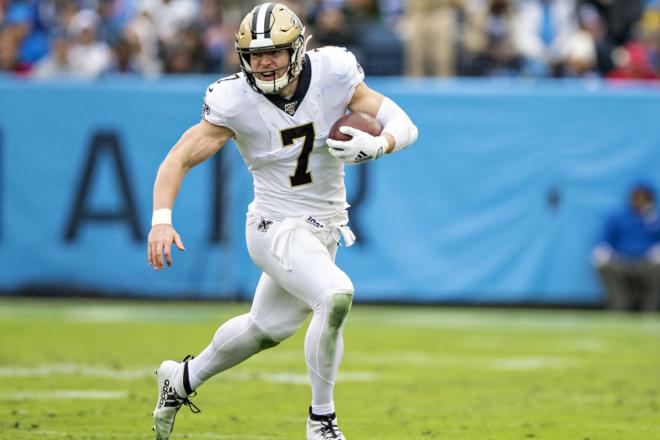 Here are my weekly plays from the waiver wire based on players rostered in less than 50% of leagues and half-point PPR scoring.

These teams are on a bye this week: Lions, Seahawks, Buccaneers, Washington

While Hill is coming off of a concussion, fortune favors the bold who plays the potential new starter who offers a high floor against the Falcons who have allowed 34.86 yards rushing per game to QBs (2nd worst).

Averaging 42 attempts per game over the last 3 weeks -- volume is king -- Tua should be able to connect with his downfield weapons since the Texans allow 12.75 yards per catch in 2021 (3rd worst).

If he returns from the IR then Taylor has an intrigue match up against the Dolphins who have allowed the second most yards per game in 2021 with 303.75 yards allowed.

In his return to the bayou Ingram played 22 snaps and carried the ball 6 times for 27 yards and catching his 2 targets for 25 yards.  The weapons deficient Saints want to run the ball and the Falcons are middling against the run allowing 90 yards per game (15th) but are also allowing 6.14 receptions (9th worst) and 46 yards per game (10th worst).

Pending James Robinson’s health, Hyde could start against a stout Bills run D but … volume, especially the type that Robinson was seeing, is king and Hyde saw 8 targets in 9 carries in week 8 on 50 snaps.

Johnson has definitely taken a back seat to rookie Michael Carter.  But he’s seen 6 and 7 targets over the last 2 weeks and scored twice in the last 3 games while playing only about 20 snaps a game which is enough to be serviceable.

If desperate, Hines matches up against the Jets who are arguably the worst in the league at covering RBs after giving up a league worst 79 yards per game and 8.29 receptions per game (2nd worst).

Averaging 7.3 targets per game and the Giants are allowing 14.1 receptions per game as well as a little over a TD per game

With DeSean Jackson asking to be traded, Jefferson is the deep ball threat for the Rams against the Titans secondary that is the worst in the NFL in receptions per game 16.5 and yards per game 216

Conklin is averaging a touch over 5 targets per game and playing 78.5% of the team’s snaps. The Ravens are one of the worst team in the NFL against TEs this season yielding 6 TDs (league worst) as well as 77.9 yards per game (2nd worst) and 6.5 catches per game (3rd worst)

Engram, as sort of the last man consistently standing for the Giants, has seen a steady diet of 4-8 targets this season.  He also faces Raiders’ D which has given up 68.1 yards per game (6th worst) and 6.29 catches per game (4th worst).

Dan Arnold v. Colts could also be used in Week 9 v. the Bills after being targeted 8, 5, and 10 times over the last 3 weeks but his Week 10 matchup against the Colts is much more favorable.

The Texans’ offense has scored under 10 points 4 times this season and their O-line has allowed at least 2 sacks in each of the last 6 games.  If Tyrod returns though, reconsider, maybe?

If he’s back from the IR then Rodrigo at home in the dome on Thursday night might be the play with the Colts offense scoring at least 30 points in 4 straight games.

Joseph has gone 16 for 20 on field goals this season and has scored at least 10 points in all but 2 games.