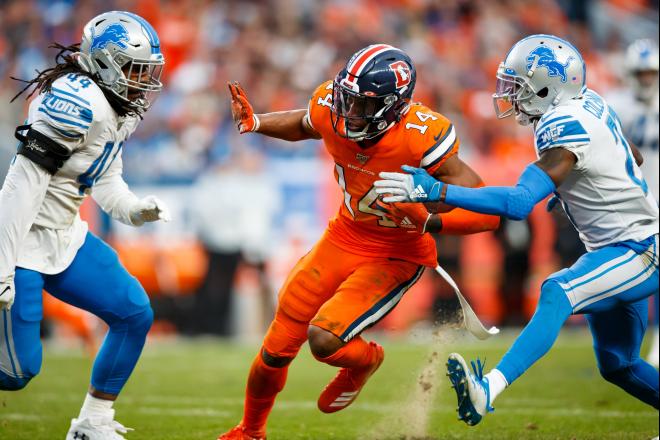 Well, how 'bout them Browns. D'ernest Johnson deserves an apology because that was a tremendous performance against what was supposed to be a good run defense. It was a good way to sum up byepocalypse, which I for one am very happy is over. Week 8 is a new week, nearly marking the halfway point into our fantasy seasons. Man, is this year flying by.

By now, there are probably three types of players. The 6-1 or 5-2 players smiling their way through life. The 1-6 or 2-5 players contemplating life as they know it. And then there are most of us... sitting between it all, just hoping to not get caught in the crossfire and making it into the fantasy playoffs unscathed. Here's to hoping for a strong second half. In order to do that, let's take a look at this week's 5 Starts and 5 Sits.

I don't know how many times we will see Jones' name here, but he gets the nod in Week 8 in a primetime matchup against the nonexistent Chiefs defense. The Chiefs are currently struggling on offense, but we can't predict that trend to continue. Jones should be getting a few weapons back this week like lighting in a bottle, Kadarius Toney, and the sure-handed Sterling Shepard. Jones will also use his legs to get the offense rolling, which fantasy managers will enjoy.

Gainwell has been the better back so far this year compared to his teammate, Miles Sanders, who is hurt by the way. With Sanders out, Gainwell will see an uptick in carries and command more targets from the backfield. But I also believe Boston Scott is a good play this week, as the Eagles face the Lions horrid rush defense in Week 8, allowing both of these players to be fantasy relevant.

Sutton is bouncing back fairly well from his season-ending injury he suffered in last year's campaign. He is seeing great target volume and sports the highest depth of targets in this receiving room. Sutton will now benefit from a matchup with Washington, who have allowed the second most fantasy points to opposing wide receivers. Jeudy may return, but it will be on a limited snap count and will mostly hamper the value of Tim Patrick more than anyone else. So, play Sutton with confidence this week.

I'm usually not a fan of playing middle-tier players in tough matchups... but here I am. Tonyan faces a tough Arizona defense, yes, but he's also the only other pass catcher (not named Aaron Jones) that Rodgers will have on Thursday night. Volume is king, right? Well, I wouldn't be surprised if Tonyan see's his highest target share of the year in Week 8 and ends up a low-end TE1 on the week.

"Don't bet against Aaron Rodgers." That's what somebody smart says. Alas, I am not smart. I can't justify playing Rodgers in an away game, against the fourth hardest defense for opposing fantasy quarterbacks (first if you don't count the teams who have had their bye), and will be without his top-2 receivers in Davante Adams and Allen Lazard. He may put up a decent outing for fantasy, but a good pivot this week would be Kirk Cousins. Daniel Jones is also a good play this week as highlighted above, but that feels illegal playing him over Rodgers. Either way, at least temper expectations this week.

Off game, on game, off game, on game. So, now is his off game, right? Probably one of the more frustrating players this year, Gaskin has seen his usage severely dwindle since the end of last year. It was nice to see him top double-digit carries last week, but against arguably the best defense in football right now, it's best to leave this boom or bust back on the bench, as a bust game ensues.

I could, and I should make this one brief. Probably fantasy football's biggest bust this year is Allen Robinson. The offense looks terrible, Nagy is a very bad coach (sorry Bears fans), Robinson has an embarrassing aDOT (average depth of target) and is not seeing anywhere near the volume we are used to him getting in year's past. Looking at film, it doesn't look like he's really trying out there, and I don't blame him. But he's hurting fantasy lineups and does not deserve a spot in your lineups. (Now naturally, this may be his best game of the year since I put his name here...)

This is a trap game. Uzomah hasn't seen more than three targets in 6 of 7 games this year. That low volume is not dependable and his efficiency on these minimal targets are not sustainable. Uzomah isn't going to take his two to three catches to the house every week, especially in this one, where he most likely won't be needed. Don't fall for it.

Projected to be the highest scoring game this week, the Cowboys travel to Minnesota to face a very capable Vikings offense with a lot of fire power. This should be one of the more exciting games of the week, but not if you're watching with either of these defenses in your fantasy lineup.