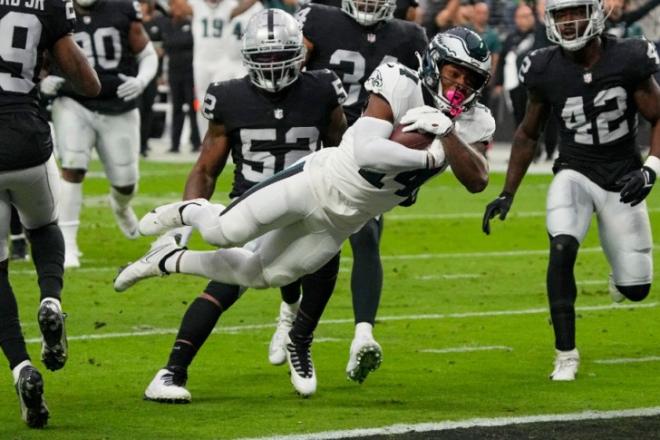 Through six weeks of the NFL season 23 games were decided by a score with less than 1 minute left to play. That’s an extraordinary stat and shows have competitive the NFL is today. Then there are weeks like Week 7 when no one is watching the 4th quarter because all the games are already decided. Only two games this week were decided by less than a touchdown. Truly this week would be boring if it wasn’t for our beloved fantasy football. Where the only score that matters is what’s in your lineup and blowouts mean garbage points, and we all love garbage points. The good news is there were more blowouts on Sunday than injuries, let me walk you through them as week look forward to Week 8 and your journey to the playoffs.

This is a hard one for Miles Sanders owners. Sanders has been one of the biggest bust of the season so far - no doubt about it. Sanders has only averaged 9 carries a game this season, but to start the game against the Raiders he had 5 carries on the very first drive! Then he got carted off the field. He looks to be out at least a few weeks with an ankle injury. This boosted up both Boston Scott’s and Kenneth Gainwell's gameplay and they both finished the game with a TD. I would suggest Gainwell over Scott as Gainwell seems to be the favorite in the eagles offense as he stole a lot of touches this season from Sanders. Boston Scott is a risky streamer but with Gainwell already having 3 TDs on the year he will be the main tailback for Philly as long as Sanders is out and he's jumped up to the RB2 conversation.

Josh Jacobs was one of the biggest question marks for fantasy managers coming into the season. Yet so far he’s been solid when actually on the field, with a TD in 3 straight games even though he’s been banged up. His new chest injury could keep him out a few weeks but with the bye coming up next week he may not miss anytime at all. They are playing the Giants Week 9 so if you have Kenyan Drake keep a close eye on Jacobs injury. If Jacobs misses week 9 Kenyan Drake will get RB1 numbers. Yes, I said RB1. Drake has gotten 3 TDs in the last two games and against a poorish run defense Drake will add to that. Jalen Richards is a streamer at best if Jacobs injury causes him to miss more than a few weeks.