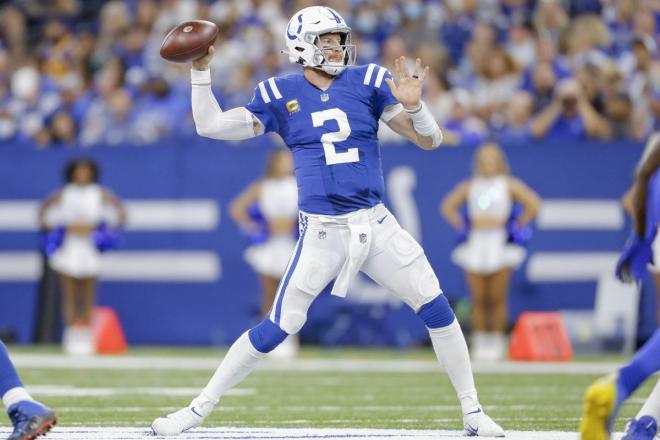 Based on half-point PPR scoring players on less than 50% of rosters.

Teams on a bye week: Ravens and Raiders

While the Titans D allowed a season low in passing yards to Patrick Mahomes, they have still given up 291 yards per game this season (7th worst). Wentz has also thrown 2 TD passes in each of his last 4 games, offering somewhat of a high QB floor.

Against the Seahawks, opposing QBs have averaged 39 attempts per game, completing 26.5 passes (3rd worst) for 306.17 yards (5th worst) offering Lawrence some volume potential as a streamer.  He also can be counted on for a few scampers a game and has a rushing TD in two of his past three starts.

Gainwell finds himself in position to see more touches and snaps after Miles Sanders’ ankle injury while benefiting from a friendly RB match-up against the Lions’ D, which has allowed 105.4 yards per game (10th worst), 9.1 yard per reception (5th worst) and a total of 12 TD (6 rushing, 6 receiving) to RBs in 2021.

During the last 2 games he’s suited up (placed on the COVID list for Week 6) Perine has posted 11 carries and over 50 yards, adding both a rushing and a receiving TD. The Bengals are expected to be playing from ahead, which could mean more carries for Perine as they salt the game away in the second half.

Penny is supposed to suit up on Monday Night against the Saints and he could be worth considering depending on his health and workload (yes, that’s how rough Week 8 looks for streaming RBs that you can trust). Honorable Mention: DJ Dallas.

The theme for Week 8 WR streamers is “play ___ if ___ injured player does/doesn’t play against a bad pass D”.

If Sterling Shepard and Kenny Golladay are sidelined again Toney is a must play against a horrid Chiefs secondary.

Has seen at least 5 targets each of the last 5 weeks and Washington’s pass D is only slightly less horrid than the Chiefs.

Obviously both could be sideline and then you can ignore this, but the Dolphins are thin at WR without them and they will probably need to throw the ball to keep up with the Bills.

Gallup has been missing from the Cowboys passing attack since Week 1, when he saw 7 targets catching 4 of them for 36 yards, but if he returns in Week 8 he would be walking into a potential shootout against the Vikings.

5 TDs in his last 4 games is tough to ignore.  Even if Uzomah is not able to score in the Meadowlands, the Jets’ D is allowing 6.7 catches (6th worst) and 71.5 yards (6th worst) per game to TEs this season.

Mac Jones has thrown 6 INTs in 2021 and the Patriots RBs have fumbled 5 times. Meanwhile the Chargers’ Pass D has only allowed 216.67 yards per game (3rd best).

The Bengals have held opposing offenses to 17 points or less in 4 of 7 games this season.  With the Jets’ Zack Wilson now out nursing a knee injury they could easily make it a 5th game under 17 points.

Tallied at least 3 FGs in 3 of his last 4 games and has hit four 50-yarders this season.

Has connected on 11 of 13 field goals this season including three 50-yarders.