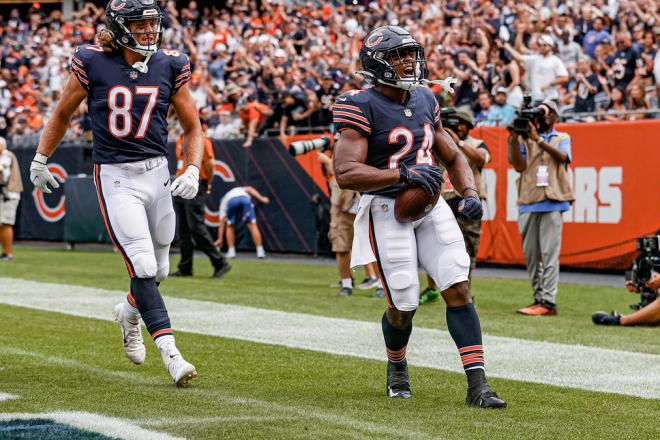 Based on half-point PPR scoring players on less than 50% of rosters.

Week 6 offers three QB streaming options -- all of whom could give you reason for pause.

But all three have largely above average receivers corps and are playing at home against suspect pass defenses.  The Cowboys (327.6), Seahawks (321), and Chiefs (308.4) are 1st, 2nd, and 4th in passing yards allowed per game.

Jones should provide volume as opposing teams are attempting a league high 41.4 passes against the Cowboys, which have given up 2 passing TDs per game.

The Seahawks are giving up the 5th most completions per game (26) perfect for Big Ben to spread the ball around.

We expect Washington to be playing from behind and the Chiefs defense seem to fit Heinicke “Fitzpatrick-yolo style”.  They are second worst in the NFL in yards per completion (13.78) and are allowing the most rushing yards per game to QBs (47.2) which offers a high floor.

Before Clyde Edwards-Helaire injured his knee both William and Jerick McKinnon were seeing snaps at RB.  Now with CEH status unknown and not playing for the next few weeks, Williams seems to have the edge on the starting job after leading the Chiefs in snaps 37 to McKinnon’s 27.  In Week 6 they face the vaunted Washington D-line who has been good against the run, but has allowed 5 receiving TDs to RBs, the most in the NFL.

After Saquon Barkley went down Sunday with an ankle injury Booker was the next man up for the Giants, out-snapping Elijhaa Penny 60 to 6.  This season, the Rams, Buccaneers game aside (because why run when you have Tom Brady), have been allowing 4.31 yards/carry (14th in the NFL) and have also given up the 5th most receiving yards per game to RBs (54.25).  Booker figures to see plenty of volume as the Giants’ Week 6 starting RB.

For the third week in a row Thursday Night Football has provided a potential starter (fingers crossed for the Bucs and Eagles RBs this week).  Collins' fantasy usage due to Chris Carson’s injury status, but it’s a good bet that Pete Caroll will be running the ball more with Geno Smith now behind center.  Though the Steelers have a stout run D and haven’t allowed a TD to RBs through 5 games.

The Virginia Tech rookie ran for 75 yards on 18 carries in Week 5 as a part of the running back committee with Damien Williams, who tallied 16 carries. The Bears clearly want to establish the run with Justin Fields at QB, as their running backs have totaled 34 carries each of the past 2 weeks.

Toney was the Giants' offense against in Week 5 -- he was targeted on 13 of 24 routes, caught 10 balls for 189 yards and was wide open multiple times against the Cowboys corners.  Fast forward to Week 6, the Rams secondary seems to be more susceptible to more physical receivers after being tagged for big games by DK Metcalf, Mike Evans, and Michael Pittman Jr. but Toney has earned more snaps and targets because of his explosiveness even if the other injured Giants receivers return.

St. Brown has led the Lions in targets over the past 2 weeks seeing 8 in each game and snagging 6 and 7 balls.  It's not an exciting offense but the level of volume is enough for a bye week replacement.

If Parker returns from the hamstring injury that kept him out of Week 5 he will face a Jaguars secondary that is allowing the 2nd most yards per game (223) and 5th most receptions per game (15.5) this season.

Now tied with Terry McLaurin for the team lead in red zone targets with 4 and facing the Chiefs' D which is allowing the most yards per game in the NFL to TEs (87).

Henry seems to have a weekly floor of about 4-5 targets and has caught TDs in each of the last 2 games.  The Patriot pass catcher will now face the Cowboys’ defense who is lackluster against TEs allowing 11.9 yards per catch (4th worst), 65.3 yards per game (6th worst), and 3 TDs through 5 games.

Picking on Davis Mills and the limited offense.

Packers have at least 1 INT in each of the last 4 games.

The Lions have scored 17 points or fewer in each of the last 4 games.