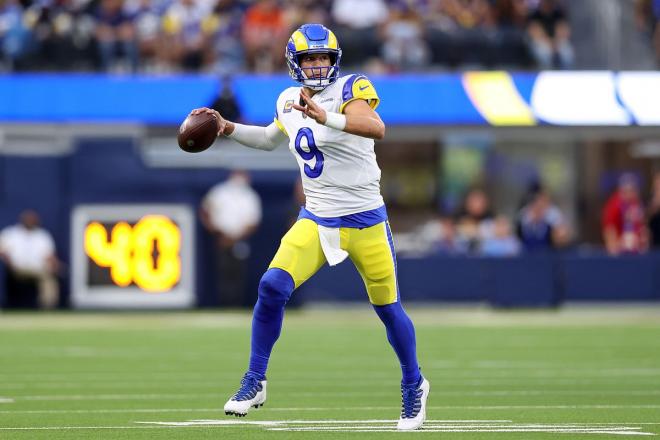 Before we get into our Week 5 starts and sits, I must issue a couple apologies. First, I’m sorry for doubting you, Cordarrelle Patterson. I’m sorry that we’ve never seen you produce at this level ever in your career and that I didn’t believe you would actually breakout while in your 30’s. I won’t do it again. Secondly, I’m sorry Washington fans, as we have all grossly overestimated your defense. The hype and expectations were real heading into this season. But yikes, it isn’t looking too hot. Hopefully, it will improve as the season goes on, but for now, I’m sorry.

Alright, that’s enough apologizing for one day. Let’s get into this week’s Starts and Sits.

Stafford has been electric for fantasy managers this year, and now he gets to continue his hot streak with an easy matchup against one of the leagues worst secondaries. Stafford has an incredible duo in Kupp and Woods, alongside tremendous tertiary players at his disposal such as Tyler Higbee, Desean Jackson, and Van Jefferson. He has good odds to finish as the QB1 this week.

Hunt picked up where he left off last season. Despite playing second fiddle to Nick Chubb, Hunt continues to put up RB1 numbers. You can thank his passing involvement and extreme efficiency for this. Speaking of that, the Browns will face a Chargers defense allowing over 5-yards a carry to opposing backs. Factoring in that this should be a competitive game, Hunt will see his fair share of targets making him a very high RB2, low-end RB1 this week.

Stefon Diggs, Cole Beasley and Emmanuel Sanders. All viable plays this week as the Bills are set to square off against the Chiefs. We all know the Chiefs will score, and we know their defense is non-existent. This will be the highest scoring game in the week, so why not get the players who will be catching all the passes? Every one of these receivers is seeing terrific volume. Diggs is obviously WR1 for fantasy managers. But treat both Sanders and Beasley as low-end WR2’s, with Sanders having more upside but a lower floor.

Pitts has been a disappointment for fantasy managers, especially when you factor in draft capital in fantasy drafts and the real draft. But with his volume and the lack of receiving options in Atlanta, Pitts is still a worthy start. It’s hard to find tight ends who are extremely involved in their respective offense. It will be hard for the Jets to matchup against Pitts in this one, especially in the redzone, where I predict he scores his first NFL touchdown… in London, nonetheless. Start him with confidence.

New England’s defense is good. I want to leave it at that, but I have to mention that they will also face the Houston offense with a rookie quarterback who has made his fair share of mistakes. Start them with confidence.

Carr finally fell back down to Earth last week against the Chargers. The offensive line struggled to keep him safe in this one, which scares me about his next matchup; the Chicago Bears lead the league in sacks and are among the top ten hardest matchups for opposing quarterbacks. There are better options, as Carr’s upside is limited.

Carolina’s defense just got gashed by Ezekiel Elliot. And yet they are still the fourth-hardest matchup for opposing running backs. But no matter the matchup, Sanders has been losing vital passing down work to Kenneth Gainwell. Sanders is also losing rushing attempts and valuable goal line touches to his quarterback, Jalen Hurts. The matchup, paired with the many obstacles, makes Sanders a risky play.

Cooks see’s 37% of Houston’s target share, he accounts for 48% of the team’s receiving yards and 40% of its receptions. Thank you, Twitter. So, why bench him? Because New England takes away your best option, and in this case, the only option. Mills can do whatever he wants to force it to Cooks, but the percentage chance that this is successful is very low. Garbage time could salvage his day, but Cooks scares me in this one, even with his target share.

Tonyan has been somewhat irrelevant this year. If you take out his Week 2 performance, his stat line would be 7 receptions for 22 yards and no touchdowns. He’s hard to trust, even with an elite quarterback. The Bengals are also the 6th ranked defense against opposing tight ends in fantasy. He simply isn’t worth the risk.

Remember what I said about a high scoring game? I get it, the Bills defense has been unbelievable, and they will continue to be for the rest of season, but traveling to Arrowhead to face the Chiefs? There are other streaming options. Look for the Raiders, Cardinals or even the Patriots on waivers.