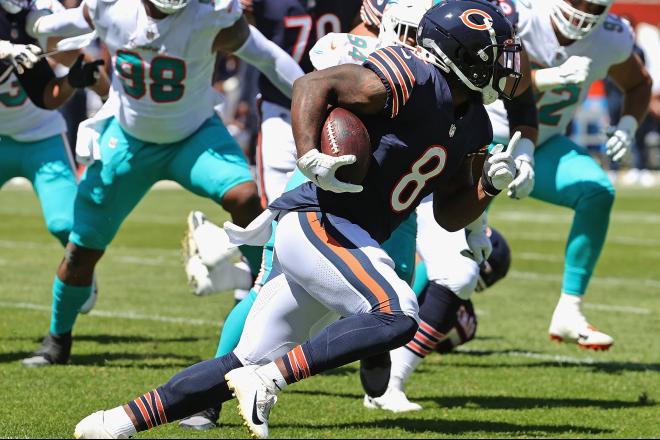 Fantasy football is truly beautiful. Very few things in life can bring you extreme joy one second, and less than a minute later take it all away. Atlanta Falcons fans are used to this feeling, as once again they blew another game with only minutes to go. The ups and downs is what makes this sport just a thing of beauty but also a nightmare to deal with. Speaking of nightmares, let’s run down some of the unfortunate injuries from this past week.

Speaking of fantasy bringing you joy and tearing it away, let's talk about David Montgomery. He was having a spectacular week and most likely carrying your fantasy teams. Then just like that, the fantasy gods strike and take all your happiness away.  Montgomery left the game in the 3rd quarter with what looked like to be a serious knee injury, he may not miss the entire season but will have an extended stay on your bench. Now, just like Chuba Hubbard last week, Damien Williams becomes the top Wavier pickup. He had a very efficient game against the Lions with 8 rushes for 55 yards. Williams should be an immediate pickup especially given a favorable matchup against the Raiders, who are giving up 4.8 yards a carry this year. He jumps into the RB2 conversation.

The Washington Football Team pulled off a stunner against the Falcons even while being hit by the injury bug. Players were dropping like flies, including three of Taylor Heinicke's favorite targets. With Thomas most likely missing a few weeks, along with Gibson being banged up, McKissic jumps up into, dare I say, a must-start flex play. He’s owned in less than 50% of leagues and already has two big games under his belt. It was expected that Gibson would become more of a receiving back this year, but it’s been JD who is the favorite 3rd down guy. His target share will rise and he will get more than 5 targets a week alongside a handful of carries. He’s not a real flashy guy, but in PPR leagues he could be gold. Go pick him up. You won’t regret it.

Not often do you see two of a team's top contributors get hurt and the team improves, but that’s exactly what happened on Sunday when Trey Lance entered the game after Jimmy Garoppolo went down. He only completed 8 passes but it seemed like every play he made was a big one. Lance is only owned in 18% of leagues and if you need a backup QB he’s a great option even if Jimmy doesn't miss much time Lance showed a lot and he will get more playing time. Trey Lance also found a new favorite target and Deebo Samuel who ended the day with 8 catches for 156 and 2 TDs. He becomes a must start with a very high upside if Lance starts. Now Ross Dwelley signed an extension to begin the year and is the clear TE2 behind Kittle. Keep an eye on him if George Kittle‘s injury drags out, as he had 1 catch for a 20 yards and a TD and TEs are very hit or miss so far in this early season.