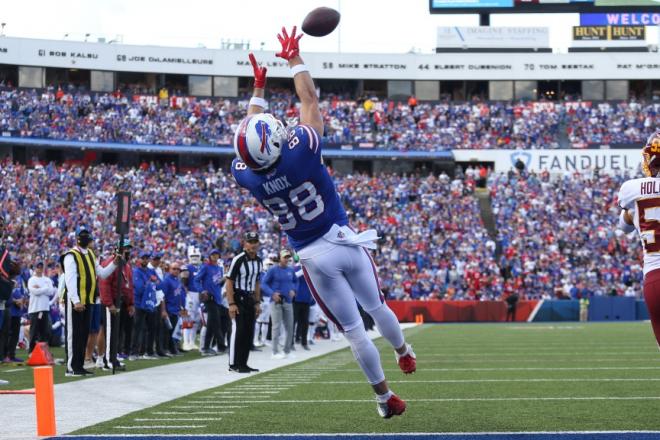 Based on players less than 50% owned and half-point PPR scoring.

After 4 weeks Darnold is the QB 5 in fantasy. He hasn’t thrown less than 34 times in a game and also boats 5 rushing TDs on the season. Follow the volume.

After Darnold, Jones is the QB 6 through 4 weeks.  You should be able to count on him for another 30+ pass attempts and 5-10 rushes against the Cowboys in a game with an over/under around 50.5 points according to Pinnacle.

The 49ers want to run the ball which usually is bad for QBs unless you are Lance, who offers a high floor after rushing 7 times after taking over in the second half for the injured Jimmy Garoppolo.  Week 5 against the Cardinals could prove to be a “try-out” for Lance ahead of the 49ers Week 6 bye.

With David Montgomery’s status unclear after suffering a knee injury, Williams is the next man up.  On Sunday, ‘Playoff Damien’ ran for 55 yards and a TD while catching 2 balls for 15 yards.  The versatile back could see all the volume in albeit a tougher week 5 match-up against the Raiders, who have been fairly stingy against RBs only allowing 77.67 yards after the first 3 games in 2021.

The Ravens decided to make Ty’son Williams a healthy scratch, handing the backfield over to the veteran Murray who carried the rock 18 times against the Broncos.  With Ravens an early 7-point favorite against the Colts, Murray could be in line for more volume.

Gainwell has overtaken Miles Sanders as the back to own. Reason 1) The Eagles threw on 72% of their snaps in Week 4 and 62% for the season so far. Gainwell is the passing down back. Reason 2) He’s also seemingly overtaken Sanders as the red zone back, seeing more targets (5 v. 2) and rush attempts (6 v. 5).

A million years ago, back on Thursday night Joe Mixon, exited the game late with an ankle injury. Mixon had been seeing the vast majority of RB snaps and touches, so Perine should be the first man up in the Bengals backfield ahead of Rookie Chris Evans (the former Michigan back not Captain America -- who of course would be a must add if the Avengers did choose to suit it up).

In what should have been a more obvious play, with the Lions focused on Allen Robinson, Mooney exploded for 125 yards on 5 catches. He will have a much tougher match-up next Sunday against the Raiders but he’s now out targeted Robinson after 4 weeks (26 v. 24) and his big play potential can always provide dividends.

Moore should be returning from a concussion and Crowder in his first game of the season posted his usual PPR statline: 7 catches for 61 yards while adding a TD. In Week 5 the Jets duo match up against a Falcons secondary that has allowed 43.7 fantasy point/game to WRs in 2021 (8th worst in the NFL).

Seen exactly 6 targets in every game and recorded 15 catches on the season. With so many other weapons to cover he’s got a sneak chance at catching a TD.

Now has four touchdowns on the season and is tied with Stefon Diggs and Cole Beasley with 6 red zone targets. The Bills who have scored 118 points in the last 3 weeks will be looking to avenge last season's playoff loss to the Chiefs.

Scoring in the last 2 games, Schultz looks like he’s pulled ahead of Blake Jarwin in the Cowboy’s TE picking order. In Week 5 he faces the Giants who have allowed a league high 4 TDs to TEs.

At home with a defensive line that’s getting pressure against a rookie making his 3rd NFL start with limited weapons to cover.

See above, except rookie making his 1st NFL start.