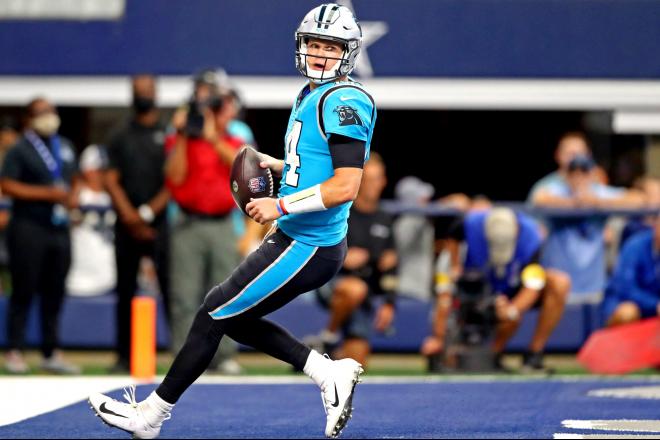 Week 5 is upon us! I sincerely hope everyone who reads these articles took my advice going into Week 3 and grabbed Cordarrelle Patterson. At the time he was owned in 13.4% of leagues and was RB#8… he is currently owned in 87.1% of leagues and is RB#2. He’s been a very pleasant surprise, especially when you own Myles Gaskin… no joke, I thought he got cut mid-game this past week.

Anyway, I hope all of you had a great week of fantasy, we are onto Week 5 and the time to make moves is ramping up. Personal advice to all, start looking at your leagues… pick out those at the bottom and start making offers. Now is a great time to buy low on players who have gotten off to a “slower” start… I’m targeting Nick Chubb, Damien Harris, and Miles Sanders.

Here are 6 players you should target heading into Week 5!

The injury situation with Jimmy Garoppolo should be monitored, but I believe everyone’s on the same page that Trey Lance will eventually take over anyway, right? Lance fits the offense that Head Coach Kyle Shannahan runs, almost perfectly. Should Lance take over I would put him in the top 8 of all QB’s through the rest of the season.

Thursday in Week 3 I was watching Carolina and Houston - Steve Smith made a comment about how Matt Rhule is used to getting high school kids and making them into college players, he went on to say how he is doing that with Darnold, taking a player from basically a high school system (sorry, Jets fans, that is more of a slight on Adam Gase), and developing them. Darnold is currently QB #5, leads all QBs in rushing TD’s, and looks like a great weekly option.

Starting RB David Montgomery is expected to miss a month or more, meaning Damien Williams is in line for RB1 duties in Chicago. I would be really, really excited for Damien Williams regardless, but especially if Justin Fields remains the starting QB. He adds a whole extra dimension to the run game that other QBs on the roster just can’t match. For what it’s worth, Pro Football Focus has Damien Williams as the better RB in almost every category, so even when Montgomery comes back into the fold, his job might not look the same.

There is just something about Jamison Crowder that makes me overlook him every year. I think it’s his last name, “Crowder” looks too much like “Chowder,” which is thick and heavy… but also delicious and consistent. I’ve had too much coffee today. Grab Crowder in every format, he is at the very least a top flex option weekly.

Jefferson’s teammate, Cooper Kupp, has had an incredible start to the season. Which means defenses will probably start keying on him a little more going forward. The main beneficiaries of this are 1) Robert Woods, and 1A) Van Jefferson. Jefferson has gotten 6 targets in his last two games, up from 3 per game in his first two, and with his big play ability… 2 catches might be all he needs.

Averaging 5 targets per game, in a high-powered offense, the thinnest position in fantasy football, 4 touchdowns in his last 3 games? Sign me up. Knox is a no-brainer pick-up this week and should be a top 5 TE the rest of the season.