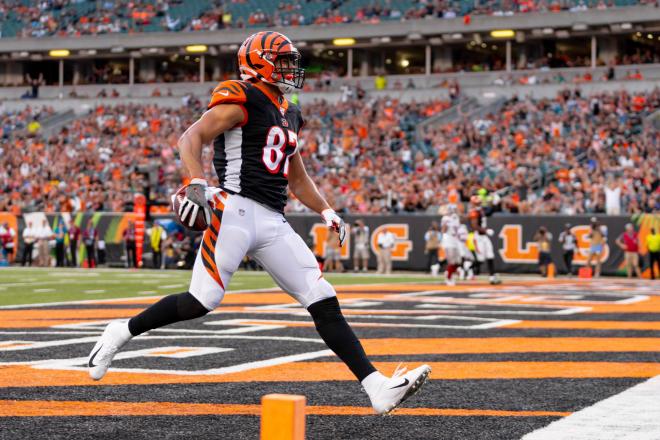 While Bengals quarterback Joe Burrow unquestionably has great chemistry with his former LSU teammate Ja'Marr Chase, he's developing it with his other receivers.

One of those receivers is tight end C.J. Uzoma. Coming into the 2021 season off an Achilles injury that ended his 2020 season after two five-plus target games, he was a bit of a question mark.

Well, he's picked up where he left off. Quietly productive, he finished top-20 in tight end snaps in both 2018 and 2019. He then went off for 95 yards on six catches in the Bengals 24-21 win against Jacksonville.

Uzoma has shown Burrow that he can be a great outlet in the tough going. Expect the former Heisman Trophy winner to continue to use the 6'6", 260-pound Uzoma on a regular basis.

First, he hauled in six Trevor Lawrence tosses in the Jags' heartbreaking 24-21 loss to Cincinnati. Using his size, the 6'1", 227-pound 2020 second round pick made tough catches in traffic, showcasing exceptional reliability.

Second, D.J. Chark - arguably Jacksonville's top wide receiver - looks to be out for quite some time with an ankle injury.

Targeted over eight times per game after week 13 in 2020, Shenault looks to maintain or exceed that number in the coming weeks. Look for him to maintain his productivity as he establishes himself as a go-to target for Lawrence.

He might not be flashy, but the 5'9", 219-pound Robinson just gets the job done on a nightly basis.

And with the Jags offense getting better game by game - and the absence of Travis Etienne, who's out for the season, expect the undrafted free agent to continue to carry the ball 15 to 20 times per game.

Over the past two games, Robinson has carried the ball 33 times for 166 yards, good for a 5.03 yard-per-carry average. He is well-positioned to enjoy a productive second season in the NFL.