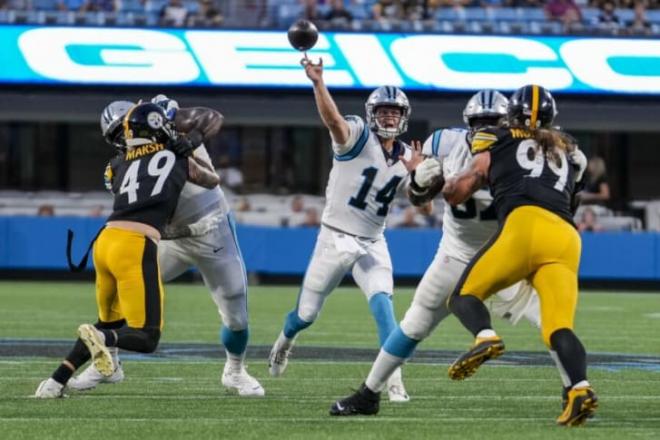 Based on players less than 50% owned and half-point PPR scoring.

The Panthers defense has looked like one of the best in the league so far but they have a few tough matchups ahead: Cowboys, Eagles, Vikings, Giants, and Falcons. Those 5 teams also feature suspect defenses.  So tougher offenses to keep up with + suspect opposing defenses + 296 yards per game (9th in the NFL) should lead to decent outcomes.

Has attempted at least 32 passes over the first 3 games with at least another 6 scrambles notching 2 passing TDs and 2 rushing TDs. Not the sexiest of choices but the floor feels pretty safe.

Heinicke did not look great in Buffalo on Sunday throwing 2 INTs but was able to save his fantasy day with 2 passing TDs and another rushing TD.  The Football Team visits the Falcons who have given up 31 points per game this season making for a potential “get-right game”.  Plus, WR Curtis Samuel, who has yet to play this season due to a groin injury, is eligible to play this week, potentially adding another versatile weapon for Heinicke.

Must Add. Last year with Christian McCaffery out the Panthers dropped Mike Davis right into the “CMC” role. Expect the Panthers to do the same with the 4th round rookie Hubbard.

If you miss out on Hubbard, give Freeman a look since you never know until you see it.

With Kenyon Drake being used as -- a very expensive -- pass down back in Week 3, Barber recorded 23 carries for 111 yards and a TD in the Raiders’ overtime win.  If Josh Jacobs is still nicked up then Barber provides flex potential against the Chargers run defense that has allowed 4 running backs to tally at least 10 fantasy points in 3 games.

The savvy route running veteran showed his ceiling in Week 3 with 94 yards receiving and 2 TDs. If you need it, Josh Allen and Sanders could provide another spike week against Houston

With K.J. Hamler now out for the season the Broncos target tree narrows and Patrick is a steady receiver who has efficiently tallied at least 11 fantasy points in each game this season catching 12 passes in 13 targets.

PPR Magnet with a high floor. Second on the team in targets with 23, Renfrow has 16 catches and a touchdown so far this season.

Gordon hasn’t played a down since 2019 but he’s worth adding in case the once prolific wideout has any juice left.

After only seeing 8 targets in the first two games Conklin drew 8 more targets in Week 3 turning them into 7 catches for 70 yards and a TD.  The jury is still out on the Browns coverage of TEs after they have faced Travis Kelce in Week 1 who tagged them for 2 TDs then Jordan Akins and Cole Kmet in Weeks 2 and 3 who were catching passes from rookie QBs. Conklin, who certainly will not be a focal point of the Browns coverage, has a decent shot at catching a TD in Week 4.

After seeing 6 targets in Week 3, injuries at WR to both Sterling Shepard and Darius Slayton might lead to more targets for the once (still?) talented TE in Week 4.

A bit of a roll of the dice against a struggling rookie QB.

I don’t think anyone has been impressed with Carson Wentz and the Colts’ offense through 3 weeks as they have averaged just 18.7 points per game.

Follow the points. Vegas has pegged the Vikings-Browns matchup with the 3rd highest over/under of week 4 at 52.5 points. Alternatively, you could look at Vikings kicker Greg Joseph who is equally unowned.

Made both of his 50-yarders in week 3 and is 8 of 8 on point after attempts this season.