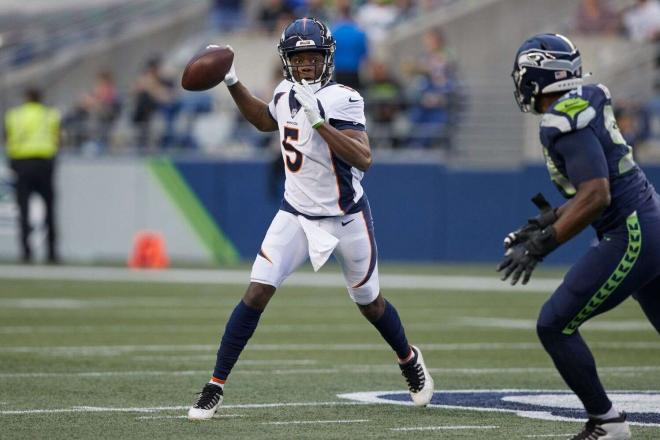 With Week 2 now in the books, most fantasy GM’s are beginning to decipher what is real and what isn’t. Although two games is not a big sample size, it’s what we have as fantasy managers to work off of as we make dire decisions on who to drop and who to hold on to as we dive into the waiver wire for Week 3. If you haven’t already, check out ASL’s Michael Morrow’s top waiver wire adds article and see if any of his picks are still on waivers after it has processed.

With that said, there are some narratives that may be hard to believe through two weeks, which leaves many starts and sits debacles for fantasy managers. So, here are 5 Starts and 5 Sits to help you through Week 3.

The matchups keep coming for Teddy Bridgewater as he comes off a battle against the Jaguars to face the New York Jets. The Broncos are heavy favorites at home and there is no reason to believe that the quarterback won’t be fantasy relevant in a good matchup; especially a quarterback who currently ranks second in the NFL in QBR (Quarterback Rating). Even without Jeudy, Bridgewater has utilized his weapons efficiently and effectively. Thanks to a mediocre run game, it looks like the Broncos are fine with pushing the ball down the field with Teddy Two Gloves. He’s a fine stream this week.

One thing we know for certain through two weeks is that the Lions defense is bad. Another thing we know, and I don’t know if you knew this or not, but the Ravens like to run the ball. Put these things together and you get a solid start at running back in Williams. The Ravens are projected to be in the lead this entire game, which means a lot of running. And running can equal fantasy points… unless you’re Najee Harris behind the Steelers offensive line. Sorry, Harris owners. But anyways, if you have Williams, start him.

Follow the volume. We all love wide receivers on teams with bad defenses, and the Jags are one of those teams. So, even with his age, it’s hard not to get excited about Marvin Jones Jr. given that he is Lawrence’s go-to option with 20 targets and two touchdowns over their first two games. This week, they will try to keep up with Kyler and the explosive Cardinals offense. Not likely to happen, but hey, the volume doesn’t care. Factor in the injuries to Shenault and O’Shaughnessy, and Jones Jr. won’t even need to get into the endzone to pay off for fantasy managers.

Yes, Kittle has been extremely underwhelming. But this offense continues to sustain injuries and Kittle is one of the few options left, and he is still an elite talent. I also suspect the 49ers will need to pass more than usual in order to keep up with a Packers offense who found their footing last week. The Packers are also one of the league’s worst in defending against the position. Don’t panic yet, keep him in your lineups for Week 3 as the volume, talent and matchup will be too good to pass up.

The Panthers young defense has taken a huge step up from last year. After two incredible performances against the Jets (I know, it’s the Jets) and the Saints (I know, it’s Jameis) they now get to face Davis Mills and the Texans. Sacks, turnovers, and low yardage totals are inevitable.

News broke the other day that Ben is dealing with a pectoral injury. It’s on his non-throwing side, which is good. But he has already looked old and sluggish through two weeks, and it doesn’t help that he is sitting behind a bad offensive line. The team will do their best to run and get the ball out of his hands quick. The yardage and touchdowns may be hard to come by in this one. Look elsewhere.

Henderson is dealing with a rib injury, so he is questionable to play in this one, although coach McVay believes he can practice this week. Either way, play or no play, going up against a stout Tampa Bay run defense is never enticing. Neither Henderson or Michel will be able to do enough to garner fantasy relevance in this matchup, especially since most of the passing work is going to Cooper Kupp and… well that’s it. Sit both backs.

I know, he scored two touchdowns last week and dominated a terrible Atlanta defense. But, as seen in Week 1, Evans can vanish, especially given the number of options on this offense. Gronk is also competing with Evans in redzone targets. Pepper in the fact that Evans will see shadow coverage from Jalen Ramsey, and Tom Brady will look elsewhere to move the ball downfield and use Gronk to finish off drives. Evans is high risk, high reward, but in this case, he is very high risk with little odds to reward. If you can, look elsewhere. If you can’t sit him, which most of us probably can’t, then temper expectations.

Most of us probably don’t have this problem, but if you have Everett then don’t play him. After Pete Carroll hyped him up all offseason, talking about how it will be his breakout year, Everett has seen two targets in each game. This could be a shootout, so I could miss on this, but last week 75% of the passes went to wide receivers. Will Dissly is also still hanging around and running routes, so I’m out on Everett right now.

I think this is a get-right game for the Bills offense at home against a team who let Daniel Jones have his way with them. The upside of this defense is capped given the matchup and that Heinicke, who has been good filling in at quarterback, could easily put his defense in plenty of bad circumstances. And although that is hard to project, it’s a real possibility. It’s hard to sit such a good defense but the upside just isn’t there this week.