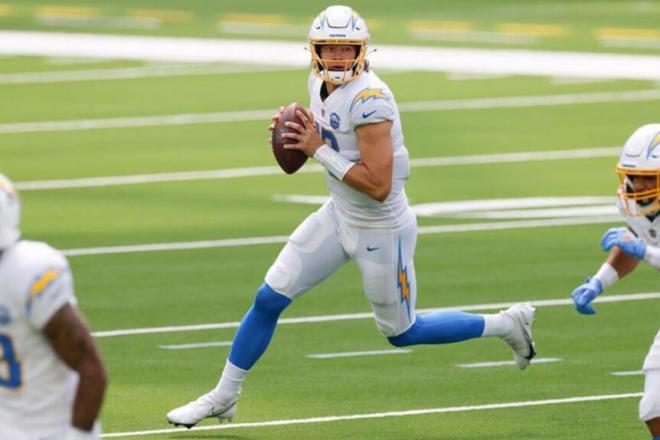 Week 1 is in the books and wow, what a way to cap it off. Monday night's game was a beautiful bow that tied the week together. Now, we get to follow that up with a Thursday night matchup involving Washington's Tayler Heinicke and New York's Daniel Jones. Yay...

As fantasy managers, we just hope they can put their bad play aside and support our players, for the greater good of our fantasy teams.

Not exciting enough? Don't worry, I have a fresh copy of this week's Starts and Sits hot off the press.

Herbert struggled against a solid Washington defense last Sunday, but don't go thinking that was the true Herbert and last year was a fluke. This kid has talent. This game will be much different than the last. It may be one of the higher scoring affairs, which means dial up the QBs in fantasy. The Dallas defense showed us that their defense still needs work, and losing one of the most pivotal pieces in DeMarcus Lawrence, will help with time in the pocket against a vulnerable secondary. Not to mention, he isn't short of weapons... so put him in your lineups.

David Montgomery picked up right where he left off in 2020. After facing a negative game script and one of the best defenses in the league, Montgomery still finished with a stat line of 16-108-1. Queue up a better match up and better game script and you have another potential RB1 showing for Week 2. Let's keep the good times rolling!

One of these guys have to hit, right? But really, all three of these options face off against a defense that didn't know how to cover virtually any of the Ravens receivers. The secondary also benefited from two things, Maxx Crosby and Yannick Ngakoue. One of these guys won't be playing, and the other, like the rest of the team, will be flying across the country on a short week to play the early slate of games on Sunday. Johnson and Smith-Schuster should have a great floor with upside, while Claypool could have a boom-game.

Well he showed me. Fant looks healthy and ready to go, more importantly, showed that he is a go-to target for Teddy Bridgewater. And now with the open targets from the Jeudy injury, Fant has a chance to show out and end up as a top 5 tight end this week. He gets to face a Jags defense that has simply given up, and it's only Week 2. Fant... don't embarrass me again!

I mentioned them last week, like Fant, and I'll mention them again... like Fant. Because it's a new week and a whole new matchup. The Browns defense goes from the Chiefs in Kansas City to the Texans in Cleveland. No, Week 1 was not a microcosm for things to come in Houston. They're pretty bad. And the Browns defense is pretty good. Play the match up, win your week!

Tua was decent to start the season, he did face a good defense in the Patriots so we can cut him some slack. But now he faces another good defense in the Bills. Yes, the Dolphins are at home, but that won't change his matchup and the fact that he still has some flaws to his game. He can save your fantasy day if he rushes for another score, but I'm not banking on that. I imagine much of the same for Week 2. The bright side, he faces the Raiders in Week 3, so better times are ahead. But I'd stay away for now.

Sanders looked good to start the season and I truly think he will be a strong fantasy asset this year in the right matchup. This isn't one of those matchups. Yes, San Francisco has a weak spot in its secondary, but its front seven is still incredible. It will be hard for Sanders to garner enough running room to be fantasy relevant in your lineups this week given that he also shares rushing attempts with Gainwell and Hurts. And if the game script falls apart, and I expect it to, Sanders will lose viable playing time to Gainwell. It's a hard sit, but if you have someone like Elijah Mitchell or even Chase Edmonds, I'd go that route in Week 2.

This one hurts. I'm a fan of Davis, he has the skillset, volume and draft pedigree to be an incredible receiver. But in a tough matchup, with a rookie quarterback who will be running for his life behind the worst offensive line in football, it will be hard to imagine Davis being relevant this week, even with the volume he saw last week. Speaking of volume, Crowder is coming back and will be the escape route for Wilson when a play breaks down or if there is a heavy pass rush, which will basically be every time. It's best to leave Davis out of your lineup and see how this plays out; without the risk of losing your fantasy matchup.

On the other side of the ball, I'm not sold on Smith yet. He out paced Hunter Henry by one target and only one snap on Sunday. Who's to say Henry wont out pace Smith in targets this week? Or that the game plan will be to run more. Or that the Jets actually aren't terrible at covering tight ends, similar to last year. One week isn't a sample size for me to trust Smith in my tight end spot, but some of us may have to, so let's hope I'm wrong. I like Austin Hooper and Jared Cook as potential streaming options over Smith.

Usually top defenses are starts no matter what, and in this case most of us may have to, but don't be excited about this matchup. San Francisco is traveling across the country to play a pretty good Eagles offense. But that isn't what really scares me. What scares me most is the secondary. Losing Verrett was a killer to the second level of this defense. The team just signed Dre Kirkpatrick which shows me that the coaching staff is well aware of their problem. 49ers D/ST owners just have to hope the front seven make enough of an impact to make this one worth your while... but don't hold your breath.