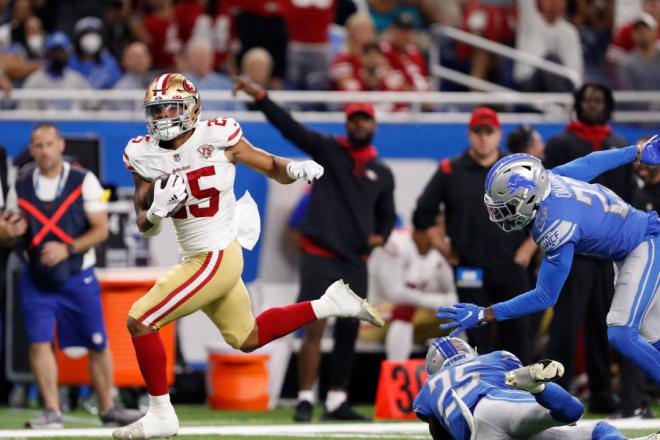 Finally, the NFL season is back. Weeks 1-4 of every fantasy season are by far the most important. This is where you can roster breakouts, handcuffs, and players who can change the whole course of your season… be on the lookout for those early drops as well *cough* Tee Higgins and Justin Jefferson last season *cough*.

This is my third season writing for ASL so it’s always good to have an idea of how I pick the players I recommend.

Here are 7 players you should target heading into week 2.

Jameis Winston has always been a great fantasy QB. While in Tampa Bay, he had tons of volume, threw the ball 50+ times per game, and was always in the top tier of the league in yards, touchdowns, and… well, interceptions. He was always that guy you could get in the late rounds and start him all year, that is why I was shocked that more fantasy owners weren’t higher on him this season as the starter in New Orleans. Winston was incredible in the Saints 38-3 victory over Green Bay, even though he only threw for 148 yards, he was accurate, mobile, and didn’t give the ball away… oh yeah, he also threw 5 touchdowns. The only question I had coming out of this game was what would’ve happened if Green Bay looked anything like a football team? Winston might have thrown for 300 yards and 7 touchdowns. Grab and start him in every format.

Full disclosure, Heinicke should be someone you would target in 2-QB or superflex leagues. With Ryan Fitzpatrick heading to IR with a hip injury, Heinicke will take over as the starting QB on an exciting Washington team. Heinicke came into the game Sunday and completed 11 of 15 passes for 122 yards and a touchdown, he also added 17 yards on the ground. He is worth rostering in 2-QB, superflex, and even dynasty leagues.

With Raheem Mostert heading to IR (shocker), you should be putting all priority claims on … wait, who? This whole situation is a mystery to me, folks. If you would have told me before the game that Mostert would go down, I would have fully expected Trey Sermon to not only produce, but take the starting job and run with it. However, Sermon was a healthy scratch on Sunday - and there are not many concrete sources that can say why. Anyway, we move forward - and Elijah Mitchell did a lot of moving forward on Sunday against the Lions. Mitchell took over after Mostert left with a knee injury and put up 104 yards and a touchdown on 19 carries. This offense is built around the run, it’s a no brainer to grab anyone involved - even JaMycal Hasty.

While most of us probably spent time before our drafts wondering who would be the starter between Phillip Lindsay and David Johnson, Mark Ingram is the one who gets 26 carries in Week 1. I’m not saying the numbers were great… 3.3 yards per carry is nothing to get excited about, but the volume of 26 carries sure is. Grab Ingram for your bench in every format.

While most owners looked towards Kenny Golladay this draft season, Shepard went under the radar in most leagues. Shepard, when healthy, has been a fairly consistent WR for the Giants. I’m not saying he will continue this pace as Golladay, Kadarius Toney, and Darius Slayton should demand more target share, but Shepard is worth a roster spot, especially in deeper leagues.

Okay I know, he only had 3 targets, but the team only threw the ball 20 times. If Jameis Winston continues to be a solid starter for New Orleans, Juwan Johnson, like many tight ends before him on that roster, should be on your team.

Gerald Everett is by far the fastest and most athletic tight end that Russell Wilson has had at his disposal so far in his career. This position is very, very thin, so grabbing anyone that has a legitimate chance to finish in the top 10 makes sense. Everett should continue to see a healthy volume of snaps and targets in Seattle.