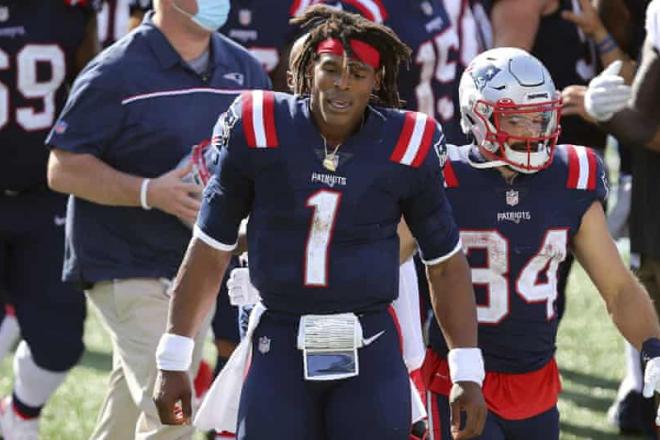 NFL: What Transpired on Cutdown Day?

Well, today was cutdown day in the NFL.

And as NFL teams trimmed their rosters from 80 to 53, there were - as usual some surprises.

Let's take a look at what transpired...

Understandably, Newton's release was the story of the day.

That's because Bill Belichick gave the former league MVP his walking papers shortly after saying CN1 was "definitely heading in the right direction."

Turned out, the direction he was heading out of town, likely to Dallas or Pittsburgh, as both teams are in the market for a legitimate backup. And Newton can now be acquired at a cap-friendly price.

Where does that leave the Pats?

With an inexperienced prospect - Mac Jones - at starter and Brian Hoyer and Jarret Stidham behind him on the depth chart.

No doubt, Jones is excited, but is also feeling the pressure. How he handles it will likely determine whether the Patriots make the playoffs, or not, this season.

Not a Great Day for Veteran Wide Receivers:

In Los Angeles, former Bills wideout John Brown - after signing a one-year deal with the Raiders in the off-season - asked for his release and got it.

Then, the Philadelphia Eagles cut loose wideout Travis Fulgham, who put up 539 yards on 38 catches last season - almost good for an average of 14 yards per catch.

The Packers also cut Equanimeous St. Brown, who snagged only seven passes in 12 games in 2020. Keke Coutee - who caught 33 passes for 400 yards last year in Houston - was also sent packing by the Texans' new regime.

Three receivers should catch on somewhere, with Fulgham at the top of the list followed by Coutee, Brown and St. Brown. Teams are always looking to add depth with savvy veterans.

Only 27, the 5'11", 225-pound Barber will undoubtedly find employment quickly. The oft-injured Freeman may get one more chance to show he's still got it.

Don't look now, but the Cowboys backup is now....Cooper Rush?

Yep, that's who's backing up Dak Prescott now that the 'Boys cut both Ben DiNucci and Garret Gilbert.

What's the betting line on Jerry Jones getting in touch with Cam Newton ASAP to see if he'll come to Dallas to back up Prescott?

The Pressure is on Young QB's:

In Jacksonville, with Gardner Minshew gone, Trevor Lawrence now has the controls to the Jags' offense all to himself.

Likewise, Zach Wilson is The Man in New York (will he outperform his crosstown counterpart, Daniel Jones?), while another Jones, this one Mac, is the centerpiece of the Patriots' offense.

With the expectations high, we will soon see just how much weight the broad shoulders of those three young men can bear as they attempt to carry their teams to respectability (Lawrence, Wilson) and to the playoffs (Jones).

And who knows - in time, the Bears' Justin Fields might just be the best of the bunch, as it's just a matter of time before he supplants Andy Dalton as Chicago's starting quarterback.

It's going to be a fun, action-packed - and unpredictable -season!